+
JMJ
Feast of the Nativity of the Blessed Virgin Mary 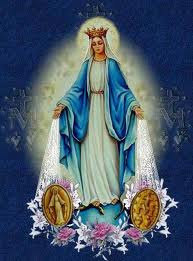 She shall crush thy head (Gen 3.15, the Catholic Douay-Rheims Version). Thus God speaks of Our Blessed Mother's role in His plan of Redemption: She is the one to crush Satan and his forces through Her Divine Son, Our Lord Jesus Christ. Since it was by a woman that led us into the dominion of Satan, it was fitting then that God elected also another Woman to undo and repair the injustice of the first; to bring us back to God's dominion; and, even to crush Satan and his forces in their pride and rebellion by her humility and submission, and in their guile by her perfect purity and innocence. And just as Eve became the accomplice of Satan in the mockery of God thereby bearing the firsfruits of it and projecting upon the whole of creation the darkness of Satan’s dominion, so it was fitting also that another Woman should rise as the partner of God par excellence - that is, that she must had never been under the dominion of Satan since her conception.

The birth of Mary is the dawn of our redemption; her appearance projects a new light over all the human race: a light of innocence, of purity, of grace, a resplendent presage of the great light which will inundate the world when Christ, lux mundi, the Light of the World, appears. Therefore the Church, in her sacred traditional Liturgy, sings: “Thy nativity, O Virgin Mother of God, brings joy to the whole world, because from you came forth the Sun of Justice, Christ, our God.” (Magnificat Antiphon). Mary's birth is a prelude to the birth of Jesus because it is the initial point of the realization of the great mystery of the Incarnation of the Son of God for the salvation of mankind. The Mother proclaims the Son, making it known that He is about to come, that the divine promises made centuries before, are to be fulfilled. Mary, therefore preserved from sin in anticipation of Christ’s merits, not only announces that the Redemption is at hand, but she bears the firstfruits of it within herself: She is the first one redeemed by Her Divine Son.