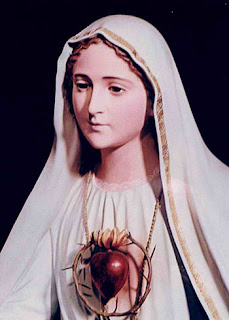 When the Great Sign in heaven - the Woman of the Apocalypse (12.1), cf., "Our Lady at Fatima - Not an Apparition of a Mere 'Private Revelation' as Neo-Catholics Claim It!" - appeared at Fatima in Portugal in 1917, She lamented that, already, "MANY souls go to hell" - and this was when the light of the Faith was not yet eclipsed. Now that the light of the Faith has been eclipsed by the Neo-Catholicism of Vatican II, even more so...

Last Sunday, 15th after Pentecost, the Holy Gospel presents to us the Lord and Savior meeting at the gate of the city of Naim a dead young man being carried away. The Lord of life, taking pity on the grieving and sorrowful mother who is also a widow, brought him - her only child - back to life but by touching only the bier. The Holy Gospel in particularly pointing to the dead to be a young man actually alludes also to the mortal state of MANY a young man - even those who bear the name "Catholic" - because of the Scriptural uncleanness.

In the Book of Numbers, the unclean - every leper, whoever hath an issue of seed*, or is defiled by the dead (5.2) - was to be excluded from the Hebrew camp where God dwells through the ark of the covenant placed in its midst. Now, St. Paul the Apostle speaks of uncleanness as excluding one from the kingdom of God. The works of the flesh are manifest... fornication, uncleanness, immodesty...(Gal. 5.19,21). St. Paul's reference clearly refers to those who issue... seed but not in the lawful act of marriage and not for its end or purpose ordained by the Natural Law: the conception of a new life (cf., Onan who was punished with death by God for wasting his seed and thus making a mockery of the divine purpose, in Gen. 38.9-10); see also, "On the Mortal Sin of Uncleanness Among Men (Wasting of the Seed of Life)".
---
* Those subject to this evil, when a filthy humour, at every moment, cleaveth to his flesh, and gathereth there (Lev. 15.2). Non-Catholic versions do not admit this of those who hath an issue of seed, taking only the sense of pathological bodily discharges as in Lev. 22.4 (KJV in Num. 5.2: 'everyone that hath an issue').
---


The Immaculate Heart of the Blessed Mother is grieving and sorrowing to see so many souls deprived** of the true Faith - and with it the true Catholic Sacraments*** - by which they could abide in the Lord of life and Him in them!  Everything that is not of [F]aith is sin... But my just man liveth by [F]aith (Rom. 14.23; Heb. 10.38). With our end-times condition of apostasy - the implicit abandonment of the Faith by adherence to the Neo-Catholicism of Vatican II, the revolt spoken of by the Apostle St. Paul and thus understood by the Fathers of the Church as the falling off of Catholic nations from the Church - spoken of by Our Lord, But yet, the Son of man, when He cometh, shall He find, think you, Faith on earth? (Lk. 18.8), and referred to by Our Lady at Fatima in introducing the Third Part of Her "Great Secret", "[Not in Rome will] the dogma of the Faith... [be] always... preserved, etc.," comes its "basest" (St. John Chrysostom in our post "Our Lady, Vatican II Disorientation, and the Annihilation of Many Nations") moral consequence: widespread impurity: uncleanness among men, fornication, adultery, and homosexuality.

See also: "On Lust and the Vice of Impurity" and "Ite ad Ioseph! (Go to Joseph!)". ** Cf., "Our Lady and the Disorientation of Rome", "New 'Catholic Theology': the Ultimate Delusion of Vatican II 'Catholicism'", "A Perilous 'Catholic' Voyage", "The Year 1929", "Russia's Errors Spreading from the Neo-Catholic Rome", "Pope Francis Proclaims the Neo-Catholic Gospel of 'Universal Salvationism'", and "Lumen fidei - a 'Modernist faith' or the Faith?" *** Cf., "A Lie at the Very Heart of the New Mass: PBXVI Motu Proprio on the Traditional Latin Mass - A Toleration [of evil]" and "Pope Benedict XVI on the New Mass - Outbalanced Liturgy"