St. Michael and the Few Elect

Feast of St. Michael the Archangel 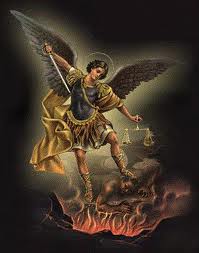 We heard in today's Holy Gospel (the Nineteenth Sunday after Pentecost) that many - Jews and Gentiles alike - have been called to the kingdom of God, that is, the Church established by His Only-Begotten Son on Cephas to be the pillar and ground of the truth (1 Tim. 3.15). But only few believed and came to the Church; yet, not all of these few when called will be saved - that is, reputed to be worthy of the celestial nuptial feast because they have not on the wedding-garment. And they will not be saved because they don't have anymore the integrity of the Faith: I will espouse thee to Me in Faith (Os. 2.20). Special reference could therefore be drawn to the 'official' SSPX who, by virtue of 'obedience', now admit that a "tampered liturgy" (Pope John Paul II, in our post "Our Lady and the Diabolical Campaign") or a "fabricated liturgy" (Card. Ratzinger, later Pope Benedict XVI, in his introduction to the French Ed. of Msgr. Gamber's The Reform of the Roman Liturgy) was "legitimately promulgated" ('official SSPX' SG in their official internal bulletin Cor Unum) - in contradiction of  the venerable Abp. Lefebvre who referred to the New Rite of M[e]ss as that "bastard 'Mass'" (having been invented by a Freemason in ecclesiastical trappings: Annibale Bugnini, cf., our post “The Catholic Sanctuary Prefigured II”). Now, how could a "bastard 'Mass'" - a "tampered liturgy" and a "fabricated liturgy" - be legitimately promulgated? Yet, in fact, there was never even a legitimate promulgation made (cf., our posts Obey God, rather than men and "In virtue of OUR Apostolic AUTHORITY")!

Charity seals the divine espousal of the just to his Beloved. But charity is the crowning monument built upon the Faith for Faith… worketh charity. When faced with the Resistance, the ‘official SSPX’ resorted to Sacrament-al ‘blackmail’, as it were, denying Holy Communion to those whom they knew to be sympathetic to the Resistance – as if the Holy Mass in their chapels were Bishop Fellay’s Mass! They have yet to become ‘officially’ part of the Neo-Catholic DisOrder but most certainly, their desire for it has already brought upon them that same New hypocritically ecumenical ‘spirit’ of Vatican II which fulminated ‘excommunication’ and resorted to banishments and propaganda against those who remained steadfast to the Apostolic exhortation: hold the traditions which you have learned (2 Thess. 2.14). Our Lord warned us to the effect also that those who look on the disoriented Neo-Catholic Rome to lust after her have already committed fornication in their hearts (cf., Mt. 5.27-28)!

The God of “Night” however is also the God of consolation. And to His pockets of elect found still throughout the world battling against the dragon under the standard of the Immaculate: He hath given His angels charge over thee; to keep thee in all thy ways [without the spirit of compromise and dissimulation flowing from the Superior as from the sick head (Is. 1.50)]… A thousand shall fall at thy side, and ten thousand at thy right hand: but it shall not come nigh thee… His truth shall compass thee with a shield (Ps. 90.11,7,5). Therefore, Holy Church fittingly commemorates also today the glorious apparition of the Archangel Michael at the head of the heavenly army who will cut our enemies off in [His] truth. “Sancte Michael Archangele, defende nos in proelio. Contra nequitiam et insidias diaboli esto praesidium!”

See also the original version of the Prayer of Pope Leo XIII to St. Michael.