Feast of St. Thomas the Apostle

"O Orient, splendor of Light Eternal, and Sun of Justice, come and enlighten them that sit in darkness and in the shadow of death" (today's "Great Antiphon"). Thus the authentic Catholic position vis-a-vis the non-Catholic world, the Light Eternal Himself verifies to be His own: You are the light of the world. A city seated on a mountain (prepared on top of the mountains... exalted above the hills, as He spoke by the mouth of the Prophet Isaias, 2.1)... that it may shine to all... (the Holy Gospel according to St. Matthew, 5.14,15). The Catholic brings and radiates the Light Eternal to the non-Catholic world that [sits] in darkness... the region of the shadow of death (ibid., 4.16) and so deliver its people from the power of darkness, and [translate them] into the kingdom of the Son of His love (Col. 1.13). 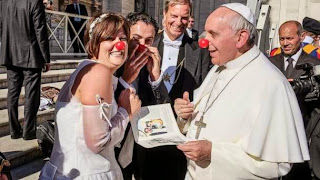 "Allow me to underline a perspective that I hold as very important [to which the false obedience of Neo-Catholicism prompts its adherents: "The 'Pontifex' has spoken, so it is with us"]... the culture of encounter... How important this service is! ... geared to what does not appear, to the growth of positive relations, based on reciprocal knowledge [the Truth is not really exclusive to the Catholic mind], on respect [now the ultimate logical consequence: each man to his own 'truth'!], on the common search [it is preposterous for a Catholic to offer his right hand to the blind and say: "Let me lead you across to the kingdom of the Blessed Light."] for ways of development [the traditional Christian notion of a more perfect conformity to Christ and Him Crucified, 1 Cor. 2.2, has become a less viable option!] and peace [give them space to satisfy their bend and inclinations in so far as they do not cause 'public disturbance'].... to the advantage of the common good [forget about the rights of sovereign dominion of the King of kings and Lord of lords over one's whole body and soul, families, and nations - it's now the "New Democratic and Republican World Order" to which the 'Church' must be in sync!], of what (Pope) Paul VI called the civilization of love [the 'Church' now has "a new way (of) being," says the Neo-Cardinal of Manila (who is a friend of Pope Benedict XVI and who emerged as a popular 'papabile' in the mock-conclave) - the Church as a kingdom subject to Christ through a royal "Sovereign Pontiff" belongs to an age now brought to a close by Vatican II!]...

[At this point, the dumb Neo-Catholic babble of "culture of encounter" is related to be a reflection of Christmas] We are given a [c]hild who in his person realizes fully this encounter of [g]od and man... this mystery of ["luv"]" (address to the Diplomatic Staff of the Italian 'Republic' and the Italian Embassy to the mock-Vatican of "diabolical disorientation," ZenitNews report, 20th December).