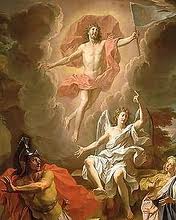 Contrary to the distortion by the pseudo-Church of Vatican II [the so-called Novus Ordo or the “New 'Catholic' DisOrder*] on the proper place of Christ's historically physical resurrection from a most cruelly excruciating death – which, they claim, is the “completion of the work of Redemption”** - were the words of the Lord and Savior on the Cross: Consummatum est (It – the Redemtion of man from sin and all its attendant consequences – is consummated.). Another is that the Holy Gospels devote more pages to the Passion and Death of the Christ than with His Resurrection. Finally, the Traditional Rite of the Roman Liturgy we have received from the Blessed Apostles Peter and Paul (We have an altar..., Heb. 10.13) emphasizes on the day of Resurrection itself the Passion and Death of the Eternal Word... made flesh (Jn. 1.1,14) to be the goal of God's redemptive work – why the Traditional Latin Mass is formally, that is, as the traditional Roman Missal of Pope St. Pius V explicitly professes it in its formulary of prayers and in its rubrics, the unbloody renewal by our Eternal High Priest... according to the order of Melchisedech, Heb. 10.21; 6.20, of His sacrifice on the Cross while the pseudo-Mass of the Vatican II-Church is the Protestant “Lord's banquet”(Paul VI, Institutio generalis)-narrative-fellowship-celebration in “loud...vulgar/ordinary dialect” (condemned ex cathedra by Pope Pius VI in his Bull, Mysterium fidei).
---
* Built on the “tampered” (Pope John Paul II) “fabricated” (Card. Ratzinger, later Pope Benedict XVI) and therefore “bastard” (Abp. Lefevbre) New 'Mass' of the Freemason Bugnini and his Protestant collaborators – which “New” 'Mass' the subverted mainstream-SSPX under the peverted regime of its Superior General now accepts in principle to have been actually “legitimately promulgated” despite the absence of any valid document to that effect at the least.

**But this 'resurrection' they refer to is not any more Catholic; generally, they profess that a historically physical resurrection of Christ is only a myth: Christ's 'resurrection' is in one's heart – the 'Modernist' deliberate confusion of what is objective with what is subjective.
---

By Apostolic Tradition, Christ's glorious physical Resurrection in its objective reality is to provide the world with a most convincing historical proof – through the Holy Shroud – of His indestructible divinity. For fallen man cannot redeem himself and human nature: “they can sell themselves but cannot redeem themselves” (St. Augustine). As a deed of a creature, sin is indeed finite but as an insult offered to God (to take the place of God, judging what is good and what is evil; cf., Gen. 3), is infinite and therefore demands an infinite expiation; but, this expiation however, can be achieved by a Divine Person only: to be capable of thus representing mankind, this Person must be, at the same time, both true God and truly passible Man.

The pseudo-Church may not categorically deny that the glorious physical Resurrection of the Christ was the final proof of His divinity but with diabolical subtlety actually denies it by ignoring it. The pseudo-liturgy with its “New” formulary of prayers serves this very purpose (following the Roman axiom, lex orandi lex credendi – that is, how one prays shows what on belives): the Neo-Catholics of Vatican II who have at last 'understood' the 'Mass' - so they claim - through the use of their vulgar/ordinary dialect do not look anymore, upon entering their temples,* for the tabernacle that they pay the Eucharistic King with the homage, by genuflection: In the Name of Jesus every knee should bow (Phil. 2.10), due the Divine Royal Sovereign – but only if by chance He still gets truly reserved there: there is the positively doubtful valid ordination of the 'ecumenical' priests of this ape-Church. “Action speaks louder than words,” as the saying goes. While its pastors send out messages and greetings of 'joy, hope, and peace', the Eternal Word strikes them with Its two-edged sword the one end of which once hit the carnal-earthly minded Jews: If you believe not that I Am He... the Beginning... you shall die in your sin (Jn. 8.26,25).
---
* The sanctuaries of which were remodelled after the Freemasons' and 'Bible-only' sectarians'; cf., "The Catholic Sanctuary..." (II)

A most blessed Easter to everyone!