St. Paul of the Cross
Confessor

As newborn babes desire the rational milk without guile...
(from the Introit of Low Sunday, 1 Pet. 2.2) 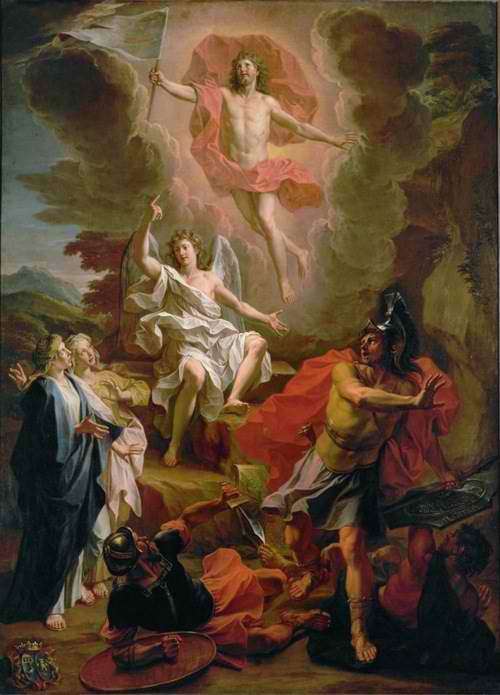 Our dear "Little Therese" was once told by her sub-prioress that a soul who approaches perfection - who becomes more and more transformed into the image and likeness of our dearest Little King Victor - becomes more and more simple for God is simple. They do not look for dramatic proofs or evidence when the point is already self-evident or when it is made known by God through His competent vicarious authority does not grumble because his too little a capacity for grasping the full breadth of a divine reality is all the more far incomparable with his constraints vis-a-vis natural realities. Thus reason submitting to Reason does in no way do violence to itself and Reason can not compel us to subvert Its first contact with us. Blessed are they that have not seen, and have believed (from the Holy Gospel of Low Sunday, the Sunday after Easter, Jn. 20.19-31) for they confess, not only with their mouths but also with their devout bended knees before the Sanctissimum (see also our post, "Christ is Risen - I"): My Lord and my God! (v.28).

Far from this attitude is the effect of that 'rationalist milk with guile' - subtle subversion of divine authority: whereas, Our Lord, speaking ex cathedra through Pope Pius VI (Bull Auctorem Fidei), condemns a sacred service (the divine worship or Mass) said “in loud... vernacular [vulgar/ordinary dialect]” (the Protestant 'Communion Service'), the so-called 'spirit of Vatican II' – the “fresh air” let in by the 'good Pope John XXIII' through his Second Vatican Council and which 'the great Pope John Paul II', sworn champion of the 1789 Revolution in the institutional Church, diffused – insisted the bringing down of the sacred reality of the Mass to the level of a feel-good phenomenon expressible in 'no non-sense' terms of a modernist mind molded by the 1789 Masonic “Rights of Man” towards 'liberal progressivism' (everything changes with the times), 'egalitarianism' (in the “New 'Catholic' disOrder”: divine ministry not exclusive to clerics: lay lectors and extra-ordinary eucharistic ministers, even counting women), 'democracy' (the SUMMUS Pontifex – the SOVEREIGN Vicar of the King of kings and Lord of lords – uncrowned with the Papal tiara, symbol of the Roman Pontiff's civil PRINCEDOM, divested of ROYAL Papal robes, and demoted to being a mere 'pontifex': a man of 'respect' for popular sentiments), 'fraternity' ('respect' for one's own opinion – even on his final or ultimate end/destiny which is a matter of divine revelation; in the so-called “Vatican II-Church”: ecumenism of religious harlotry, cf., our post The Great Tribulation). And what comes out of those lips sullied by this putrid milk – blasphemy: (on Catholic ideals – as the Social Kingship of the Lord and Savior, large families, modest and pure,innocent youth) “let's get practical,” that is, Catholic doctrines and moral principles with Jesus, the author and finisher (Heb. 12.2), being non-livable, are false: non-agreement with 'reality' – why the greatest jerk the Vatican has ever had claimed: “I believe... not in a Catholic God. There's no such thing as a Catholic God” (L'Osservatore Romano, 2nd Oct. 2013; cf., our post "The True God - The Catholic God").