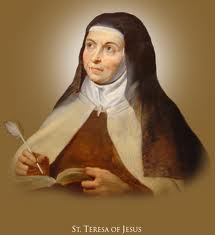 “… Reflect,” says St. Teresa of Jesus, “on the great damage parents do by not striving that their children might always see virtuous deeds of every kind” (Life, Ch. II).  But what more of parents who consent to their gay children in abandoning themselves into “the basest moral depravity” (St. John Chrysostom in our post, "Our Lady, Vatican Disorientation, and the Annihilation of Many Nations") there is which even the dumbest beast would not dare venture in, beholden as it is to the Natural Law not by reason but by mere instinct! And they deserved a warm applause by the so-called ‘Roman Synod’ patres under the ‘presidency’ of the greatest jerk-antipope (why Bergoglio is not the true Pope: "Sagittam Electam" - on the "Declaratio" of 'resignation' read by Pope Benedict XVI) there ever was! That the ‘Synod’ now welcome homosexuals abominably living together with children being raised by them should no longer be a surprise. This should unequivocally speak of how far the ‘official’ institutional mainstream Neo-Catholicism (the “pseudo-[Catholic] Church” of infiltrated Freemasons and Communists, cf., our post “The Year 1929” and “APerilous ‘Catholic' Voyage”) has already gone beyond redemption, its remedy being but its extirpation from the face of the earth by God’s direct intervention (cf., our post “The Chastisement Closes In”; see also “On the Numberof Sins Beyond Which God Pardons No More”).

According to the measure in which the love of God takes possession of our heart, it creates and nourishes in us an ever increasing love for our neighbor; but this love, being supernatural, seeks only the supernatural good of our fellow men and thus becomes zeal for the salvation of souls.

All that God does is also for man’s eternal good and therefore for man’s eternal happiness. But we should long to have some share in this action, knowing that we can do nothing which will be more pleasing to God than to lend our humble collaboration for the salvation of those who are so dear to Him – not for their eternal misery in hell with the devils.

Zeal for souls finds its source in the contemplation of Christ and Him Crucified (1 Cor. 1.23; 2.2) – in distinction to theNeo-Christ of Vatican II’s Neo-Catholic THEOlogy whom the bastard ‘Synod’ mentioned to be gazed at while they diabolically look into the destruction of the Church’s basic unit, the family . His wounds, His Blood, the excruciating agony, all tell us how much God values souls and how dearly He loves them. But his love is unrequited – or, yes, requited yet with such utter mockery of God and of His Church.