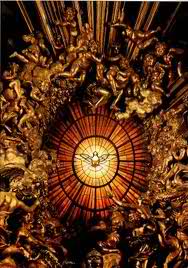 When Our Lord promised to send the Divine Spirit, He referred to Him as the Spirit of Truth (Jn. 14.17) Who Himself - not the KJV (the 'Bible') of the 'Bible-only' sects of perdition (2 Pet. 2.1) - will teach His disciples ALL truth (Jn. 16.13) and abide with [them] for ever (Jn. 14.16). Until Vatican II (1962-1965), the "Chair of the Truth" in Rome constantly adhered, in official manner - not in the capacity of a theologian or "Pontifex" (bishop) of Rome - to the truth of the written Word: All the gods of the [unbelievers] are devils (Ps. 95.5, the Sacred Latin Vulgate of St. Jerome - passage rejected by the Neo-Catholic Episcopal Conferences in their "New" 'Catholic' Versions: as the NAB/NABRE; JB/NJB; NRSV-CE). The document "Nostra Aetate" ("On the Relation [with] Non-Christian Religions") of Vatican II, the sabotaged Council and the 'Pontifex' of the Vatican II-'Church' contradict the Eternal Word declaring that  "she rejects nothing that is true and HOLY in [their] religions. She regards with sincere REVERENCE [THEIR] WAYS AND CONDUCT OF LIFE, [THEIR] PRECEPTS AND TEACHINGS WHICH, though DIFFERING IN MANY ASPECTS, from the ones she holds and sets forth, nonetheless OFTEN REFLECT A RAY OF THAT TRUTH WHICH ENLIGHTENS ALL MEN" while the Mohammedans (Moslems) "adore the one [g]od... [why the 'incumbent' 'Pontifex' professed: "I believe not... in a Catholic God. There is no such thing as a Catholic God," in the Vatican's "L'Osservatore Romano," 2nd Oct. 2013 - for Vatican II and the 'Pontifices' there's only an 'ecumenical' (g)od].

Common sense alone dictates that there can be no contradictions in the truth - they are mutually exclusive. If the one divine Religion author[ed] by the true Christ (Heb. 12.2) is the pillar and ground of the truth (1 Tim. 3.15), the Vatican II-'Church' or the so-called "New" 'Catholic [Dis]Order" (the "Novus Ordo"), since it projects itself as of equal 'ecumenical' footing with the creeds authored by the cunning ancient deceiver who is the devil playing with half-truths - one with false religions....

At 7pm-Vatican time today, at the very Feast of the Descent of the Spirit of Truth, the 'Pontifex', with a Zionist and a Mohammedan, will supplicate their 'ecumenical' [g]od for that elusive 'peace' - after almost 50 years of Vatican II-initiated 'dialogue of MUTUAL respect*' - envisioned by the Freemasons for their earthly paradise of a "New World Order" (Novus Ordo Saeculorum) of one-world government, economy, and religion. We shall expect then the "plague" God has reserved for the partisans of the devil's "Novus Ordo" with which they have been fighting  the Catholic Church (the Traditional Catholic Order which accepts only and fights for  the dominion of Christ the King over 'private' and social matters): the flesh of everyone shall consume away while they stand upon their feet, and their eyes shall consume away in their holes, and their tongue shall consume away in their mouth (Zach. 14.12).
---
* Satan and his dum[b]ies, for Neo-Catholics, deserve one which is reserved for the true God and His true Roman Catholic pastors! - who retain in their ministry at the sanctuary the unction of the Levitical priesthood, spurned in the "New" Rite of 'Ordinations', and who are of orthodox doctrine (this excludes the "Ecclesia Dei" 'Conservatives' and the Sedevacantists)
---


A most blessed Feast to everyone!