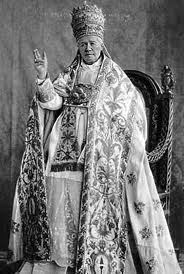 Pope St. Pius X condemns the Neo-Catholic 'Pontifex' (the antipope Bergoglio; cf., the "Declaratio" of 'resignation' read by Pope Benedict XVI, Sagittam Electam - II) who, in his soccer match for 'peace' [since our "Catholic God" answered rather with a chastisement of Mohammedan terror in Iraq the next day he 'prayed' for 'peace' in the Mid-East with his fellow enemies of the Crucified at the Vatican gardens; cf., God is not mocked!], declared: ".... Believers of different religions - PRESERVING THEIR INDENTITIES - can live together... in reciprocal respect [but true believers are bound to respect only the true God - the "Catholic God" of our Sacred Tradition - and His LEGITIMATE ministers!]... ReligionS [the Catholic Religion placed on the same footing with the worship of devils! - for, "the gods of the [unbelievers] are devils" (Ps. 95.5 - Sacred Latin Vulgate)] are called to be vehicles of peace..." (ZENIT Report):