St. Joseph in this our end-times


Solemn Feast of St. Joseph
Spouse of the Blessed Virgin and Confessor 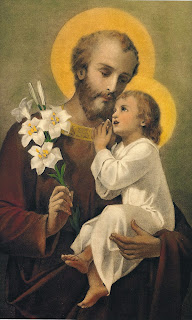 Of Old, Joseph was constituted by God as prince to oversee the salvation of the Hebrew people from a long period of famine - but governing in exile, in a land not of his own; having been betrayed and handed over as slave by his own elders.

Today, there is an unprecedented long period of famine in Christendom - lack of grace: "MANY... have the name of being alive, and [they] are dead," feeding on the temptations of the "New World disOrder" - the city of the devil where he grants in abundance bread and everything pleasurable to the flesh, stardom, and lands and riches he had once offered the Messias. This despite the easily-understood 'official' "New 'Liturgy'" widely and readily available - see the uselessness, powerlessness, of the "fabrication" (Card. Ratzinger) of an infiltrated Freemason in ecclesiastical trappings in sanctifying: what the "New" 'priesthood' could offer and yet theirs is the 'legitimate'/'licit' 'ministry'?

It was to St. Joseph's care that God entrusted the Blessed Virgin and Her Son; he was constituted the guardian of our Salvation. And to protect them, he had to take them and "FLEE" as he was commanded so by God. What we, Roman Catholic spiritual fathers, ought else do in guarding the Sacred in the face of hellish-bent "animus delendi" (the Vatican-II 'spirit' to destroy) than take the simple divine command "FLEE" (Mt. 24.16) and govern in exile when we have seen already the "abomination of desolation" set up in the Sacred Place (Mt. 24.15) - the Living Bread (if It is still there) no longer the object of greatest care BY GOD'S STANDARD in the sanctuary remodeled according to the Masonic blueprint. O, the guardianship of St. Joseph! over our #CatholicResistance fatherhood that we should not end up, as with SSPX soon, sitting with "the chair of pestilence" (Ps. 1.1) under the illusion that it is by "grace of office" that it could 'infiltrate' and 'conquer' the citadel handed over to the impious; or, in the way of false 'Pfeifferite Resistance' setting out on a mission but on its own under the illusion that the scenario at the foot of the Cross actually trickles down to the remnant with a "do-it-yourself" 'Superior General-Rector', than with an "episcopos" (Ac. 20.28), at the helm. May this glorious Patron grant by his petition what we in our power cannot obtain (Collect of the Mass). - Fr. John, C.D.
Posted by Ignis Dei at 6:35 PM