The 2nd day in the Octave of the Feast of the Blessed Virgin Mary of Mount Carmel has now been graced with the martyrdom of Her servants clothed with Her Scapular in that "eternal alliance" against the sewer of the revolutionary 'Rights of Man' - under which Masonic banner many 'Catholics' march - see, "Perilous 'Catholic' Voyage". Placed under the powerful sign of their consecration to the valiant uncompromised Heart of their Mother and Queen, their hearts had been thus sealed by the sentiments and beatings of that same blessed Heart.

This lesson by St. Augustine on the previous Feast of the Seven Brothers martyred before their blessed mother Felicity is apt: "...A mother, with superhuman love, watching her sons leaving this life before her. All men would fain depart hence before their children, but she was ready to die last. Departing from her, they were not lost, but gone before. And she looked, not to the life they were ending, but to the life they were beginning. They laid aside a life which must needs end in death, and began that life wherein they are alive for ever. The least of her work was that she was an on-looker more amazing is it, when we remember that she was their exhortress. Her courage was more fruitful than her womb, and when she saw them contending and conquering, HER HEART CONTENDED AND CONQUERED IN EACH." Why, in Carmel, especially, one would find crosses - in the cells, in the refectory - without the Crucified for "La Madre" Teresa de Jesus insisted on the demand of the Immaculate Heart: "Be ready to take the place of your Beloved."

But a heart sealed by the proud subversive spirit in such particular dedication to him...

1) Apostolic standard: "We preach Christ Crucified" (I Cor. 1.23). Peter once fell into being an enemy of Christ Crucified; Our Lord said of him that his alliance is Satan's. The Antipope, being a minion of Satan and precursor of the Antichrist (who will make himself popularly loved by the spectacular wonders which Satan's full powers will exhibit), knowing his time is sooner up, seeks the popularization of Satan's standard - the Crucified, then, from being impiously distorted to, now, being effaced but with spectacular Modernist fashion. 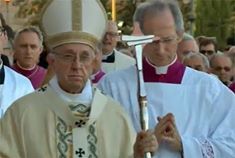 2) (Modernist) 'Franciscan cross,' so one 'apologetic' comment says - he chose the name "Francis" referring to St. Francis' end-times prophecy of him: "an uncanonically-elected man... not a true Pastor but a destroyer..."; well, if the Antichrist will enthrone himself at St. Peter's Basilica and there "[show] himself as if he were God" (II Thess. 2.4) - oh dear, oh dear, that's his precursor's, the Antipope's, IMAGE of himself on the "new age" semblance to the throne of the Crucified - the Cross - showing himself as if he were the Savior: "Hail the savior against the Lord of 'rigid' Constantinian-Gregorian-Tridentine Catholic Church?!" - Fr. John, C.D.

See also - "'Pontifex' to the Catholic Christ: Thou art an embarassment!"
Posted by Ignis Dei at 1:35 PM