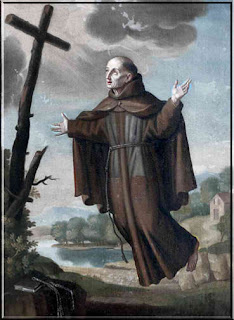 The truly "BLESSED" - not according to Lutheran-Vatican II 'liberal-Modernist Catholic' criteria of one's 'feeling'...

*True divine Religion 1) exhorts with penitence and 2) helps by offering divine cisterns that hold the Living Water; whereas the pseudo-Catholic religion of Vatican II in sync with the "New World disOrder" under Freemasonry provides disastrous "New Rite" of 'Sacraments' since 1969: "My people... have forsaken Me [apostasy - rejecting the God of Catholic Tradition Who condemns and Whose wrath blazes to the depths of hell], the Fountain of Living Water, and HAVE DIGGED TO THEMSELVES CISTERNS, BROKEN CISTERNS THAT CAN HOLD NO WATER [illegitimate/illicit - non-grace-giving - even in cases when they are still valid, cf., St. Thomas, "de Sacramentis"]" (Jeremias 2.13); logical carry-over of what the ex-Vatican Chief Exorcist, Fr. Gabriel Amorth, remarked on the "New Rite of Exorcism" (not a Sacrament but a sacramental revised according to the dictates of the "New 'Catholic Theology'") even authorized by Pope Paul VI: "USELESS!" - for (against Protestant 'Bible-onlyism') "RELIGION clean and undefiled before God and the Father is this... and to keep one's self unspotted from this world" (James 1.27), that is, "BE NOT CONFORMED TO THIS WORLD [in its 'moral' code, lifestyle and fashion, pre-occupations and pursuits]... that you present your bodies a living sacrifice, holy, pleasing unto God, your reasonable service" (Romans 12.2,1).
Posted by Ignis Dei at 5:52 PM