Forgotten Triumph of Our Lady of Fatima 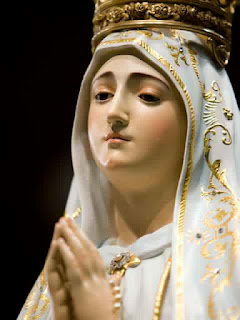 The official Catholic hierarchy in the Philippines summons today the faithful to a prayer rally-'red' protest against the Judeo-Masonic-UN sponsored 'population-control' bill before that the lower house of the Philippine Congress votes on it.

This Judeo-Masonic proposed legislation, sponsored through the Synagogue's organ of modern-day world domination - the United Nations - contravenes the divine law against contraception, cf., Gen. 38.8-10 - a sin punished by God with death for procreation is the GOOD ordained or intended by God in availing of that pleasure He attached in the use of sexual powers (which use is in turn a share in God's power over life). Thus, "the Synagogue of Satan" (Apoc. 2.9; 3.9), through its sponsored legislative measure to FINALLY make OFFICIAL a fitting NEW MORALITY for a "Republic" that has long since espoused its NEW RELIGION (the Constitutional separation of the Church and the State), subtly incites the Filipino nation to the same ancient diabolical proposal: to officially contest, as a nation this time, with God as to who should really decide on what is good - for the body especially in its 'private matters'.

On October 5, 1910 when Freemasonry*, after working for 150 years, finally brought Catholic Portugal to its knees before the Jewish Synagogue by overthrowing the monarchy [the Catholic Church has been divinely constituted to be an absolute monarchy], Magalhaes Lima, the grand master of the Portuguese Masonry, proclaimed later at an international Masonic Congress: "Here we are united... sharing the same thought... the same feeling and an identical desire. It is the thought, the idea, of a NEW MORALITY, of a NEW RELIGION" (The Cardinal of Chile, "Freemasonry Unveiled," Christian Book Club of America, 5th Printing, 1992, p. 80). The NEW RELIGION of the Judeo-Masonic-run "Republic of Portugal" featured the separation of the Church and the State while its NEW MORALITY called for the legalization of divorce.
---
* Freemasonry, being the non-militant tentacle of the Synagogue in its battle against Our Lord Jesus Christ and His Kingdom - the Catholic Church - and therefore has for its "ultimate purpose... the utter overthrow of that whole religious and political order of the world which the Catholic teaching has produced, and the substitution of a new state of things..." (Pope Leo XIII, "Humanum Genus"), is condemned "ex cathedra" for its being Satanic in its principles. Catholics who join them, receive them in their houses, afford them the opportunity or facilities for being convened, or render them help or favor openly or secretly incur excommunication (Pope Clement XII, "In Eminenti").
---
The Catholic hierarchy of Portugal, seeing the assault on the soul of their nation to be diabolical (as what the Chair of St. Peter consistently warned) did not resort to half-measures - as the official Catholic hierarchy of the Philippines does today, on the other hand, in the face of the persistent anti-Christian storm raging around. They embraced wholeheartedly the divine solution brought by the Immaculate Woman of the Apocalypse - She who shall crush the head of Satan - in Her Fatima visitation. They solemnly consecrated their nation to the Immaculate Heart of Mary and the miraculous turn-around of their nation to the sovereign dominion of Christ the King was already history (cf., our post "When Mary Comes (III)"). "What has taken place in Portugal proclaims the miracle. And it foreshadows what the Immaculate Heart of Mary has prepared for the world" (Cardinal Cerejeira). Sadly, the Catholic Bishops Conference of the Philippines (CBCP) lost for their nation - which happens to be placed under the patronage of the Immaculate Conception -  the opportunity God has given today.
Posted by Ignis Dei at 5:52 PM