The Tridentine Latin Mass: The "norm" of the Roman Rite "in perpetuity" - Pope St. Pius V

Feast of Pope St. Pius V
The Roman Pontiff who codified the Traditional Latin Mass to be the "norm...in perpetuity" (in the Apostolic Constitution "Quo Primum" of July 14, 1570) 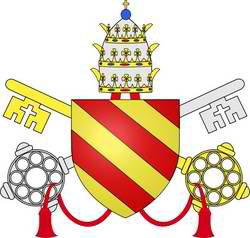 From the Apostolic Constitution "Quo Primum" promulgated by His Holiness Pope St. Pius V: "We specifically command... and We order... in virtue of holy obedience to chant or to read the Mass according to the rite and manner and norm herewith laid down by Us... Furthermore, by these presents [this law], in virtue of Our Apostolic authority, We grant and concede in perpetuity that, for the chanting or reading of the Mass IN ANY CHURCH WHATSOEVER, THIS MISSAL is hereafter TO BE FOLLOWED ABSOLUTELY... NOW AND FOREVER, without any scruple of conscience or fear of incurring any penalty, judgment, or censure, and may freely and lawfully be used. Nor are superiors, administrators, canons, chaplains, and other secular priests, or religious, of whatever title designated, obliged to celebrate the Mass otherwise than as enjoined by Us. We likewise declare and ordain . . . that this present document cannot be revoked or modified, but remain always valid and retain its full force ... Therefore, no one whosoever is permitted to alter this notice of Our permission, statute, ordinance, command, precept, grant, indult, declaration, will, decree, and prohibition. He should know that he will incur the wrath of Almighty God and of the Blessed Apostles Peter and Paul."

"We specifically command... we order... in virtue of Our Apostolic Authority...": thus how the Sovereign Pontiff, speaking "ex cathedra" and in the name of Jesus Christ - his Lord and Master - deals with a life or death matter for God's universal flock which is entrusted to his care and superintendence; he does not "wish" (Pope Paul VI in instituting Bugnini's 'Mass', cf. "Obey God, rather than men," and Pope Benedict XVI's "Summorum Pontificum": Pope Paul VI "moved by the desire" of Vatican II), does not "hope" (Pope Benedict XVI, cf. "Pope Benedict XVI's "Motu Proprio": "Toleration" of something evil"), and does not suggest nor appeal.

"... Chant or read the Mass according to the...norm herewith laid down by Us": the Sovereign Pontiff solemnly commands and orders that the Traditional Latin Mass is the norm of Catholic Worship in the Roman Rite. Pope Benedict XVI altered the injuction, making the Mass a sort of a 'fringe' Rite - outside ("extra-") the norm: a non-normal celebration - but did so not in the solemn exercise of his sovereign Apostolic Authority, commanding and ordering (on the virtual abdication of Vatican II Popes as a Middle-Ages sovereign lord, reduced to that of the modern-day constitutional monarch - limited by Freemasonry-run States to a mere ceremonial head or as a democratic "presider", cf., "The Great Tribulation").

"...In perpetuity": The Traditional Latin Mass is the norm of divine worship "in any church whatsoever" in the Roman Rite for all ages.

"... This Missal is hereafter to be followed absolutely...": Pope Paul VI's "Missale Romanum", by which he merely "wishe[d]" or "desired" the institution of Bugnini's 'Mass' (cf., "The Catholic Sanctuary Prefigured in the OT ii"), is therefore legally "null and void". Pope St. Pius V moved to protect the divine worship of the Latin Church against the most subtly insidious attacks of the powers and forces of hell, realizing, through the outbreak of the religious 'enlightenment' of the 16th century, the imminence of the ​abomination of desolation... in the holy place​ (Mt. 24.21) to be set up in the name of "holy obedience" (cf., "Obey God, rather than men...") to compromised or subverted ecclesiastical superiors - nullifying "any penalty, [adverse] judgment, censure" as they may impose against any priest (and faithful) adhering "absolutely" to the Traditional Latin Mass.

To those who would dare alter or give permission to alter the above "notice of Our permission, statute, ordinance, command, precept, grant, indult, declaration, will, decree, and prohibition": ​Let [them] be anathema ​(Gal. 1.8) and draw upon themselves "the wrath of Almighty God and of the Apostles Peter and Paul."

When therefore you shall see the abomination of desolation [the New Rite of Worship of a Neo-Christ invented by the Freemason Bugnini and "WISHED" by Pope Paul VI to be celebrated throughout the Roman Rite Church]...  standing in the holy place... flee to the mountains (Mt. 24.15,16). Flee to our Mass Centers - see our page "Catholic Resistance, Not Disobedience"