The Catholic Sanctuary as Prefigured in the Old Testament (I)

Thus was Moses commanded, even to the minutest details, in setting up the Tent of Hebrew worship with all the ceremonies to be performed by the priests. And it was the same pattern followed in constructing the great Temple in Jerusalem. 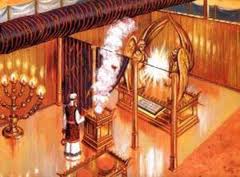 However, the Hebrew Tent of worship and the Temple of Jerusalem, with its vast ceremonial, looked forward to their perfection in the Temple of the New Covenant purified and sealed by the Most Sacred and Precious Blood shed by Our Lord on the Cross – the Catholic Church with its traditional sanctuary. The former [tabernacle] indeed had also justifications of divine service… which is a parable of the time present (Heb. 9.1,9). Now, when Our Lord came, being a High Priest of the good things to come, by a greater and more perfect tabernacle (Heb. 9.11), the shadowy forms, emblems, types, and ceremonies of Old finally had to give way into the substance they had foretold. 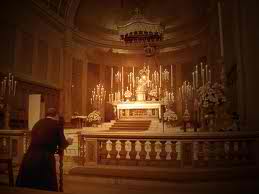 The Catholic tabernacle, wherein is reserved the Real Presence of the God-Man, is set at the very center of the sanctuary just as the Ark of the Covenant in which was a golden pot that had manna (Heb. 9.4) was at the very center of both the Tent and Temple of Old; and because there God dwells in the midst of His people, it occupies the most exalted place in the sanctuary being reserved on the High Altar raised by steps. And the Lord came down upon mount Sinai, in the very top of the mount (Ex. 19.20). 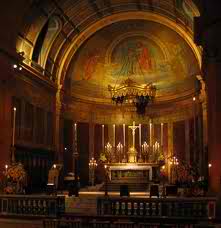 Why is the tabernacle, wherein is contained the Bread of Life, reserved on the high altar? The Word of God determines that the most holy of the sacrifices… by a perpetual right (Lev. 24.9), that is the bread… for a memorial of the oblation of the Lord (Lev. 24.7), shall always be reserved upon the most pure table* before the Lord (Lev. 24.6). Fulfilled also in the Catholic High Altar are the altar of incense (standing just at the entrance to the Holy of holies separated by a curtain, see the first picture above) and the altar on which the bloody sacrifices were offered (outside the tent in the desert or without the building called the Holy Place of the Temple) so that all the three altars of the OT rite of worship were at last perfectly united into one on which is being offered the most pleasing, sweet, and the most holy sacrifice of the Body and Blood of Our Lord. "There is question, not so much of the material presence of the tabernacle on the altar, as of a tendency to which we would like to call your attention, that of a lessening of esteem for the presence and action of Christ in the tabernacle... To separate tabernacle from altar is to separate two things which by their origin and nature should remain united" (Pope Pius XII, address to the 1956 Liturgical Congress in Assisi).
---
* In the first picture above, see the table, which prefigured also the Catholic credence table on which are prepared the bread and wine to be consecrated at High Mass and other sacred vessels, at the right side of the ministering priest, opposite to it are the seven burning candlesticks. A table on which is placed the most holy of the sacrifices is an altar.
---
The seven burning candlesticks of Old are still to be seen at the traditional Catholic sanctuary with the seventh one, He Who Is… the Light of the World, burning at the very center of the sanctuary.

the high altar destroyed, replaced by a "table";
the tabernacle, wherein is contained the Real Presence of Our Lord, booted out
from its
exalted central place:
They have taken away my Lord;
and I know not where they have laid Him(Jn. 20.13)