XVIth Sunday after Pentecost
(Feast of Our Lady of Ransom) 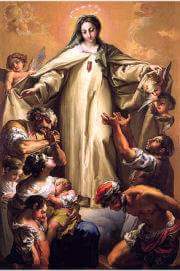 "O God... grant we beseech Thee, that we too, who love and honor Her... may by Her merits and intercession be ourselves delivered from all our sins and from the bondage of the evil one. Through the same Lord Jesus Christ..."

A most seeming coincidence between this Sunday's Liturgy and this Feast of the Immaculata - that Apocalyptic "Woman" in "enmity" with the ancient proud infernal deceiver who "shall crush [its] head" (Gen. 3.15 - Sacred Latin Vulgate):

A man who had a dropsy (unnatural collection of water in the body, esp. in the limbs) was cured - taken in the mystical sense, one weighed down by an overflowing stream of carnal pleasures (St. Bede) hence their comparison by Our Lord to beasts esp. to an ass; there were those possessed by the devil whose unnatural carnal indulgence (against the Natural Law) is no longer by pleasure but for the sake of just doing it and they could not help themselves against it.

The cure was given only on a sabbath and in offence to the Jewish 'respect' for that day - the Holy Eucharist in which our ransom, the Precious Blood, is confected (BUT IN A LEGITIMATE/LICIT, St. Thomas: grace-giving, MANNER on the Apostolic altar [TridentineMass] - not on a Masonic inspired 'table' ['ExtraordinaryForm'] in the "New 'Catholic disOrder'" since Vatican II dedicated to the idol of 'mercy and compassion' who knows no hell - by uncompromised non-'rebel' CatholicResistance priests conferred not with that kind of 'priesthood' illusioned by Luther and adopted by Paul VI, "Institutio Generalis" 1969: "presider" over a "meeting," but with that same un-improvable eternal priesthood of Our Lord which is the fulfillment and perfection of the Levitical priesthood of Old). The cure, however, is given to those who resolve to rise up and present their malady at that same traditional tribunal and "throne of grace" (Heb. 4.16) whence our Ransom is respectively applied (Confessional) and offered (Catholic Resistance altars) - Our Blessed Mother's intervention does not substitute for this but leads those who want to help also themselves back to it, giving them as well a lock and seal, as it were, i.e, Her Scapular, over the graces She will make to swell and overflow in their heart.
Posted by Ignis Dei at 2:09 AM 0 comments