'Pontifex' to the Catholic Christ: 'Thou art an embarrassment!'

Feast of the Ascension of the Lord and Savior Jesus Christ


The hour is come; glorify Thy Son...I have glorified Thee on earth, I have finished the work which Thou gavest Me to do (Jn. 17.1,4). But the Neo-‪Catholic‬ '‪Pontifex‬' (the Catholic ‪‎Pope‬ bears the title Pontifex Magnus for he is the Vicar of the King of kings and Lord of lords, Apoc. 19.16) ‪DENIES THE CHRIST before the leaders of the Synagogue of Satan (Apoc. 2.9; 3.9): 'O Christ, Thou art an embarassment'... 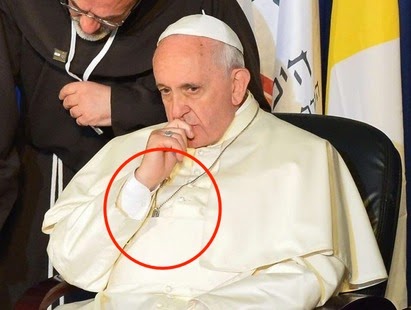 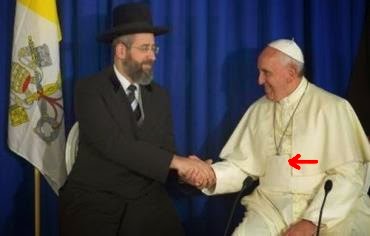 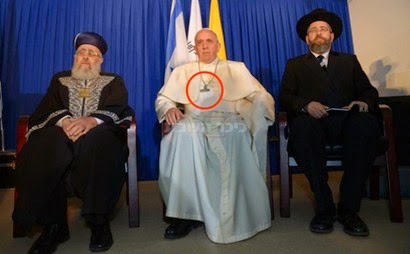 The Cross just got accidentally tucked in? The only way it can possibly happen is for the 'Pontifex' to return to his upright position from having bended backwards but even then he's fat so his cincture in the form of a sash would not allow space. So he should prove to be such a wild jerk (his bad condition seen in the video report precludes this) and the Cross must be miraculous as to force itself to tuck in his tight cincture. But besides, a Franciscan Friar (top pic) in brown habit with white cord around his waist speaking with him must have told him - this only proves that his party RESPECTs rather, in the name of Vatican II 'ecumenism' (or religious harlotry), the anti-CHRISTian spirit of the the leaders of the Synagogue of Satan: "Any meeting with us, the Pope must hide his pectoral cross.'

This was not the first time the 'Pontifex' made a mockery of Christ by tucking his pectoral cross in his tight cincture - it was during his hosting a Jewry luncheon at the Vatican itself (the first time in history) last January (cf., our post "Neo-Catholic Schism'): 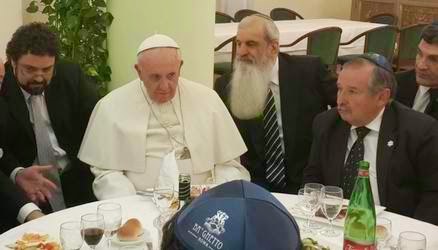 He that shall deny Me before men, I will also deny him before My Father Who Is in heaven (Mt. 10.33). He that shall be ashamed of Me, and of My words, before this adulterous and a sinful generation: the Son of man also shall be ashamed of him, when He shall come in the glory of His Father with His angels (Mk. 8.38). Neo-Catholic (Vatican II Novus Ordo) faithful, God denies that son of the devil in Papal trappings (why Bergoglio is an anti-pope and Benedict XVI is still the Pope, see the "Declaratio" of 'resignation' read by Pope Benedict XVI in our post "Saggitam Electam - I") - False apostles are deceitful workmen, transforming themselves into the apostles of Christ. And no wonder: for Satan himself transformeth himself into an angel of light" (2 Cor. 11.13-14) - deny him your 'loyalty' and 'obedience': "Catholic Resistance".