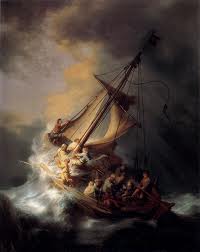 The powers of heaven shall be moved (from today's Holy Gospel, Lk. 21.25-33). Most certainly, this passage does not refer to the celestial hierarchy in perfect union with the King of kings and Lord of lords for there's nothing more which could move them away, not even by the smallest degree, from their being eternally confirmed in their loving adherence by a most complete subordination to God. The heaven referred to is God's kingdom on earth: the Church founded by the Lord and Savior on Cephas and who have the legitimate successors of the Apostles (cf., Acts 1.24-26), the episcopoi (that is, the bishops), placed by the Holy Ghost to rule it (cf., Ac. 20.28) - so that the powers Our Lord speaks of refer to these rulers.

When the disoriented Neo-Catholic Vatican stunned the world with the "Declaratio" of the resignation of Pope Benedict XVI, the impression purported was that it was of the Pope's own free will. We maintained that it was due to the heightening pressure exerted by the Roman gay-lobby (cf., our post "'Pontifex' Succumbs to the Roman Gay Lobby"). Now, thanks to a carefully verified intimate source of extraordinary worth, we learned that the Pope was forced to announce "gladly" but not "WILLINGLY" (cf., the renunciation of a "ministry" but not of the office in our post Saggitam Electam) a 'resignation' when there was no way for him drinking, as the 'incumbent' holder of the title 'Pontifex' did, the filthy potion on the 'rainbow'-colored platter presented by the 'ecumenical' Cardinals "sixty percent of whom are homosexuals [who take in male prostitutes in "Domus Sanctae Marthae"], and of the remaining forty percent mostly Freemasons [who are the patrons of those faggots in ecclesiastical trappings and their diabolical perversions within] and 'Liberals'." In light of this, we affirm that the conclave which elected Bergoglio to occupy the Chair was illegitimate, the 'election' a farce, and Bergoglio a bastard usurper* to provoke God to His Face with his grossly appalling sacrileges (cf., our post "Desacralization") and blasphemies (cf., our posts "Lingua Diabolica", Estote Sapientes, "Desacralization" and his latest "[Diabolical] Exhortation" of 26th November). "In the eyes of God, Benedict XVI is still the Pope [the "Gloria Olivae" of St. Malachy]."


"Stir up Thy power, we beseech Thee, Lord, and come: that... we may deserve to be rescued...
and saved by Thy deliverance..."
("Collect" of the Holy Mass)

On THE NEW 'MASS' (1969) - THE "NOVUS ORDO MISSAE" - OF POPE PAUL VI: "What happened after the Council [Vatican II, 1962-1965] was something else entirely: in the place of the liturgy as the fruit of development came FABRICATED LITURGY. We abandoned the organic, living process of growth and development over centuries and replaced it, as in a manufacturing process, with A FABRICATION, a banal on the spot product ["produit banal de l'instant"]" (Card. Ratzinger, in his introduction to the French ed. of Msgr. Klaus Gamber's "The Reform of the Roman Liturgy").
Therefore, brethren, stand fast; and hold the traditions [Gk: paradoseis] which you have learned, whether by word, or by our epistle.... And we charge you, brethren, in the name of Our Lord Jesus Christ, that you withdraw yourselves from every brother walking disorderly, and not according to the traditions which they have received of us.... Yet do no esteem him as an enemy, but admonish him as a brother (2 Thess. 2.14; 3.6,15)
"... During this time [we] are in the outside... They have the [church] premises - but [we] have the Apostolic Faith..." - St. Athanasius on the Institutional Church 'Overturned'