The New 'Mass' in the eyes of God

Feast of St. Ephrem
Deacon, Confessor and Doctor of the Church

Bp. Williamson : "Traditional Catholics absorb with their mother’s milk that the new rite of Mass (NOM) is an abomination in the eyes of God.... Then how can God work with it eucharistic miracles...?" ("Novus Ordo Missae - II", Eleison Comments, No. 437, 27th November 2015).

That implies that the New Mass - the so-called 'Ordinary Form' by prevarication - is in reality (in the eyes of God) not the "abomination of desolation" in its "dress rehearsal" (the Bishop referring to our age vis-à-vis the 7th and last age of the Church with the appearance of the Antichrist).

In every VALID Mass, there's already a miracle taking place: TRANSUBSTANTIATION. In "Eucharistic Miracle", the miracle that has already taken place is only made plainly manifest - now we could see it as it really is, the veils (the accidents: color, texture, taste, smell, etc. of a bread/wine) having been removed: indeed the bread was turned into the Real Flesh of Our Lord by the power of His words! To say that there could be "Eucharistic Miracle", understood in its strict sense, even in a 'Black Mass' is not 'heresy' as Fr. Cardozo and Fr. Joseph Pfeiffer's 'vagus' group (receiving no mandate and regulation from any Catholic Bishop - "placed... to rule the Church," Acts 20.28 - so that they are only on their own mission!) erroneously claim.

"MANY will say to Me in that day: Lord, Lord, did we not perform miracles in Your Name [by Consecration at Mass, according to Ven. Louis Granada, OP, a great spiritual master in the time of Sts. Teresa of Jesus and John of the Cross, in "Sinner's Guide"]? Amen, amen, I will say unto them: I do not know you, depart from Me you workers of INIQUITY!" (Mt. VII). 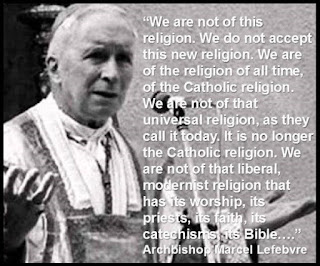 A pleasing Sacrifice before God - this is what a legitimate or LICIT Mass amounts to; not true of 'New Masses' even when the Real Presence is validly confected in them - always ILLICIT: no benefit derived even from a NOM that is valid. St. Thomas teaches that the Sacraments of heretics and schismatics, even when valid still, do not confer grace (cf., our post "The New 'Mass' even when valid, always illegitimate". Of the 'New Mass', even when valid : not only another form of parody wherein the stolen priestly powers of the Savior are abused - God forced, as it were, to be present on a polluted 'table'; more so, a "striking departure from Catholic Theology" (Ottaviani Intervention) - off with the Catholic God of Truth.

If ever God chose to make a DISPLAY also of His wonders in a valid New 'Mass' it may rather be to wake the 'devout', especially, to the PROPER Catholic "sense" of and attitude before what they hold on to still as sacred (that should get them thrown out sooner or later) and to belie the Sedevacantists.

Divine judgment: "When you shall see the ABOMINATION of desolation standing in the holy place... FLEE..." (Mt. XXIV).