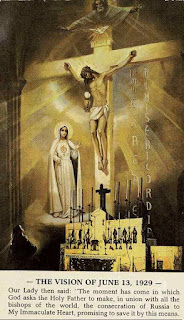 Discern... the Body of the Lord: I Am the Living Bread Which came down from heaven. If any man eat of this Bread, he shall live for ever; and the Bread that I will give, is My Flesh #TraditionalLatinMass #TridentineMass, for the life of the world (I Cor. 11; Jn. 6).

... for the life of the world - but the world is wallowing in the basest perversions of the flesh and blatantly provoking the wrath of the true Just God of Apostolic Tradition; is not the easily 'understood' 'Mass' '#OrdinaryRite' in the peoples' language - thanks to the 'progressive'/revolutionary changes of Vatican II - conveniently and readily available? This is the really illicit/illegitimate Sacrament - a "useless" (ex-Vatican Chief Exorcist) human "fabrication" (Card. Ratzinger, later Pope Benedict XVI) not acceptable before God: non-grace giving (St. Thomas Aquinas in his treatise "de Sacramentis" in his "Summa...").
Posted by Ignis Dei at 7:10 PM 0 comments

The "Spirit of Truth" vs. the 'spirit of Vatican II'

...And [the Father] shall send you another Paraclete... the Spirit of Truth... that He may abide with you forever (from today's Holy Gospel taken from 14th Ch. of St. John's).

its "diabolical disorientation" (Our Lady of Fatima): Vatican II religious harlotry of 'ecumenism' from "Nostra Aetate" (Vatican II document "on the relation with non-Christian religions).
---
* the Vatican II-'Conciliar Church' taking possession of an official Catholic Church visible manifestation (our institutions, see the "pseudo-Church" of infiltrated revolutionaries): "the great harlot... in purple and scarlet" (Apoc. 17.1,4)...
---

"If you love Me, you will keep My words" (from the Holy Gospel, Monday in the Octave of Pentecost) - But His words are law and truth; it is by the "Spirit of Truth" that we can adhere to the Eternal Law and Truth against the "unbelievers" (whose false creeds the so-called 'spirit of Vatican II,' speaking by its "Nostra Aetate" above, "REVERENCE[s]" as "OFTEN REFLECT A RAY OF THAT TRUTH WHICH ENLIGHTENS ALL MEN") : "he that doth not believe, is already judged: because he believeth not in the Name of the only begotten Son of God" (Jn. 3.18).

For this reason, "in [that same] Name of Our Lord Jesus Christ, WITHDRAW yourselves from [them - the 'official' mainstream-'Church'; not seek official 'full' communion with them as with the SSPX] who walk disorderly [along the path of religious harlotry: Vatican II 'ecumenism'], and not according to the Tradition which they have received of us" (II Thess. 3.6). 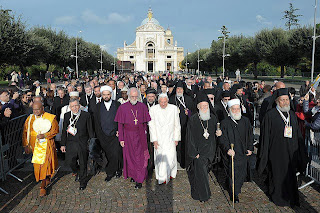 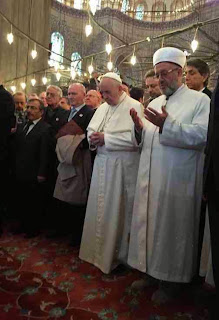 Now comes the so-called 'Charismatic Renewa' - "one of the most active movements in the ECUMENICAL FIELD... Their goal is to recreate the experience the apostles had at the Pentecost" (RomeReports). But the Apostles spoke with tongues immediately understood by their hearers (of different races) - a charism the 'spirit of Vatican II' failed to "recreate."