"Abomination of desolation in the Holy Place": distaste for the true God of Catholic Tradition

Thursday in the Octave of Easter

On the fruit of "abomination of desolation... in the holy place [the Catholic sanctuary]" : distaste for the Catholic God - both Just, Who knows avenging wrath blazing unto the eternal fires of hell, and Merciful - and His Religion; hunger and thirst for the convenient things and 'alternative lifestyle' of the "New World Order" (the "Novus Ordo")...

Mary Magdalene did not only weep at the sepulchre of the Lord finding Him "taken away" but would even go wherever He was laid to take Him. The suppression of the true Catholic Mass #TraditionalLatinMass #TridentineMass - "the continual Sacrifice... taken away, and the abomination of desolation #NewMass '#OrdinaryForm' set up" (Dan. 12.11) - was allowed by God that the hearts of His 'devout faithful' be revealed: what is their great care in their life, the loss of it to their miserable desolation, so that they would even generously go the distance in the same sacrificial way God has found and bound them to Him again. "A day will come when... in our churches, Christians will search in vain for the red lamp [at the Sanctuary, indicating the Real Presence of Our Lord in the tabernacle] where God awaits them. Like Mary Magdalene, weeping before the empty tomb, they will ask, Where have they taken Him" (Pope Pius XII, when he was still the Cardinal Secretary of State: see, our post "Abomination of desolation". "Wheresoever the Body shall be, there shall the eagles be also gathered together" (Mt. 24.28). 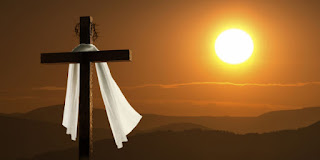 It is easy to adhere and be faithful to God when things go smoothly and His cause triumphs; but to be equally faithful in the hour of darkness, when, for a time, He permits evil to get the upper hand, when everything good and holy seems to have been swept away and irrevocably lost - this is hard, but an authentic proof of God's triumph in the hearts of His faithful who, like to their Beloved crucified for the truth, has stood by the Cross, outside their convenient walls, for "the love of the truth" (II Thess. 2.10). A blessed Easter!
Posted by Ignis Dei at 6:01 PM 0 comments