"It breaks my heart to see so many souls traveling to perdition (going 'Bible-only' Protestant in her time; now, Neo-Pagan/Vatican II-Ecumenist). I would the evil were not so great [but greatest today - being led on in broad daylight by false apostles... transforming themselves as the apostle of Christ (II Cor. 11.13)]" (Way of Perfection, I).

But the 'spirit of Vatican' breathing out the putrid impious mouth of the Antipope - see, the canonical anomally in the script of 'resignation' read by Pope Benedict XVI - (Bergoglio, alias 'Pope Francis') : 'Nah, this is cool'... 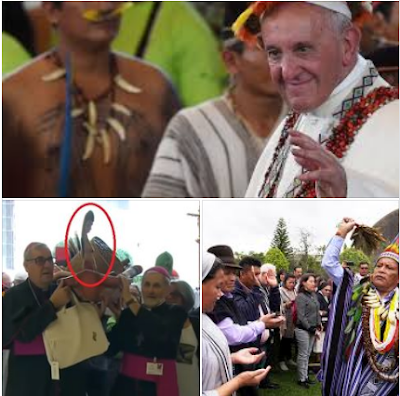 "O my dear Lord, how much oppressed You are by those whom You have shown so much good! It seems as though these traitors would send You to the Cross again and that you would have nowhere to lay Your head" (St. Teresa, ibid.).

Yet another proof : the Traditional Latin Mass 'TLM' in the "New 'Catholic disOrder" (in our parishes, seminaries, and other 'Catholic' institutions) since Vatican II (by the 'conservative' "Ecclesia Dei" mere 'SENSE of the sacred' groups) even now with the collaboration of the SSPX (up for 'FULL' integration with the false Vatican II-'Church') HAS NO GRACE as to draw the official mainstream-Church back to sanity.

The Motherhood of the Blessed Virgin Mary

I found Israel like grapes in the desert, I saw their fathers like the firstfruits of the fig tree in the top thereof: but they went in to Beelphegor, and alienated themselves to that confusion, and became abominable, as those things were, which they loved (Osee 9.10).

The Apostle St. Paul standing in the midst of the Areopagus (from the Lesson of the true Catholic Mass, Acts 17.22-34 - Feast of Sts. Dionysius, Rusticus, and Eleutherius, Martyrs) told off the pagans unabashedly that he came into their midst to deliver them from their foolishness (you are too superstitious) unto the light of Christ. In his Second Epistle to the Corinthians: What concord hath Christ with Belial? Or what part hath the faithful with the unbeliever? (6.15) This Roman Catholic mark of Apostolic attitude evaporated as the so-called ecumenical 'spirit of Vatican II' possessed the mainstream-official-Church... 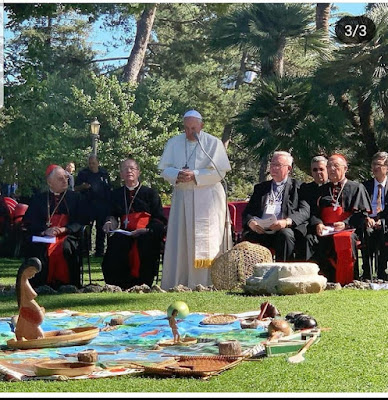 The PAGAN RITUAL WORSHIP* - self-oblation of the participants by dance "resemebling the 'pago a la tierra'" ("a traditional offering to 'Mother Earth' common among indigenous peoples in some parts of South America") and fruit-offering in a circle around the idols called 'pachamama" - recently held at the Vatican gardens-turned altar (on which the self-oblation with fruit offerings was received by their 'Mother Earth') was participated in by a Novus Ordo 'Franciscan' - in fact, according to the "Catholic World Report", the event was co-organized by the Novus Ordo "disOrder of Franciscan Friars Minor" (the official "OFM" now proudly sporting the 'rainbow' standard among its members) in time for the Feast of St. Francis. *Reality check for so-called anti-idolatry 'Bible-only' jerks whose versions teach the same, in Ex. 32.4-6, for what the Scriptural act of worship consists of, contrary to their claim: by bowing or kneeling down.

And for this they of our nation are alienated from us, and have slain as many of us as they could find, and have spoiled our inheritances (I Mach. 6.24).
Posted by Ignis Dei at 4:55 PM 0 comments