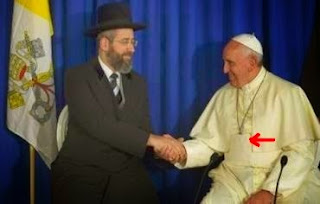 Antipope Bergoglio : "A good priest knows empathy." A 'good' Protestantized-1969 Rite 'priest' is a Novus Ordo 1789-humanist "presider." But this greatest jerk among the Antipopes exudes and oozes with tons of empathetic tricks - the 'pontifex' of the Apocalyptic locusts with "crowns LIKE gold (they have simulation of the standard of Catholic Charity): and their faces WERE AS the faces of men (the Masonic humanist chimps)" (Apoc. 9.7); ergo...

MANY will say to Me: Lord, Lord have we not prophesied in Thy Name, and cast out devils in Thy Name, and done many miracles in Thy Name [granting that some 'Nobis Ordo' 'M[e]ss' are still valid; this is a refutation of Sedevacantist 'theologism'* which declares that ALL such 'Messes' are OUTRIGHTLY invalid!]? And then will I profess unto them: I never knew you [bastards: "Priests for devils"]: depart from Me you that work iniquity [ILLICIT: not acceptable to God even if valid]" (Mt. 7.22-23). Joining their 'seminaries'?
Posted by Ignis Dei at 5:11 PM 0 comments

Feast of St. Peter Alcantara
Franciscan Reformer and powerful supporter of Our Holy Mother Teresa of Jesus
in the Reform of Carmel (the Teresian Carmel). 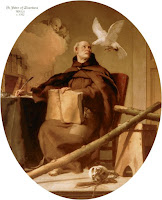 Our Sacred Tradition teaches us through the Collect of today's Mass "that by his merits pleading for us, we may so mortify our bodies as the more easily to embrace heavenly things..." It is for this reason why the Scapular Confraternity, who want to partake of our Carmelite embrace of God and delight in what concerns Him and His Rights, are obliged to generously undertake abstinence from meat on Wednesdays and Saturdays also if they are not capable to say the "Little Office" of the Blessed Virgin Mary.

"There is one thing that keeps many back from spiritual progress, and from fervor in amendment: namely a dread of the difficulty or of the labor that is necessary in the struggle. And assuredly they especially advance beyond others in virtue, who strive the most manfully to overcome the vey things which are the hardest and most contrary to them" (from "The Following of Christ").

Feast of the Blessed Virgin Mary of the Holy Rosary 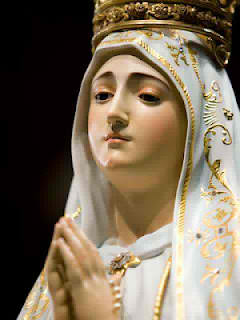 When Catholic Europe was menaced by a seemingly insurmountable militant advance of Islam, true Popes and who had the Faith - Pope St. Pius V and Pope Leo XIII - together with a Catholic civil ruler, King Charles VI of Hungary, supplicated the "Immaculata" for divine aid and victory through the praying of Her "battering ram," Her Holy Rosary (against the constant volleys of subtle errors - under the appearance of truth and good - emanating from the sewer of perversion, the "head" of the devil which the Apocalyptic "Woman" is to crush - and in a very spectacular manner, perhaps in 2017 - 100th year since the unfolding of Apocalypse XII, cf., "The Great Sign in Heaven", Her great "Triumph" against the permitted 100-yr reign of Satan and h[e]r minions. Miraculous victories were granted. In the Philippines, the poor Filipino-Spanish fleet was no match to the Protestant Dutch in that historical "La Naval" battle until they sought the intercession of the Immaculata through Her Holy Rosary hence Her local glorious title of "Our Lady of La Naval."

Europe is yet being chastised but now with a most dramatically non-militant invasion by the infidels for its loss of the Faith - a feat their militant stratagem failed to realize in the Middle Ages of Christianity; the tragic fate of Constantinople on the very Feast of Pentecost itself with its rejection of the "Filioque" (the Holy Ghost proceeding from the Father and from the Son) of the Roman "Nicean Creed" declaring: "The turban rather than the tiara [the Papal triple crown rejected by Popes Paul VI, John Paul I, John Paul II, and Benedict XVI - Bergoglio also rejected it but this hellish jerk was never validly elected]." But the 'luving' disoriented Vatican, instead of calling 'Catholics' to arm with the heaven's "battering ram:" Open your doors! - Pope John XXIII, hopeful of his 'hijacked' Vatican II: "Open the windows to let the fresh air;" at his deathbed he was crying: "Stop the Council! Stop the Council!" for his successor admitted: "worldly thinking has invaded the Church."