The Vatican II-Church of the "New World disOrder" celebrated a feast in 'honor' of St. John Mary-Vianney 4th of August (St. Dominic in the Church's calendar) - the 'patron' also for its ecumenical pastors. 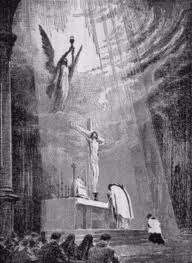 One of its 'biblical scholars', Guilio Cirignano, recently complained (L'Osservatore Romano, per Malaysia 'Catholic' "Herald," 30 July 2017) against "a good number" of clergymen opposed to the crazy dynamo of the Antipope - as still carrying in them some vestige still of a traditional Catholic priest "poorly enlightened... kept within an old horizon." This, according to this 'erudite' ecumenical pastor, is Pharisaical hypocrisy exhibiting a convoluted 'fidelity to tradition' in 'reverential devotedness to the past' - now he (and his pseudo-Church) is deeply fried up by his own standard: the Pharisaical attitude, for him, is all that he has in clinging to a priest of "old horizon" and even for his patron, as per his Pope's insistence ('obedience!'), to stay officially 'Catholic' still in 'full' communion with the Pope. This "state of affairs happens...," says he, "when knowledge of theology is mediocre and below that is still preparation in biblical studies... when university studies... don't even promote even a minimal of critical thinking!"

They'd better begin throwing off then the images of our Catholic Popes, Bishops, and Priests of the "old horizon" still exalted as saintly patrons in our churches, seminaries, and monasteries these apostate 'Modernist' dung-headed parasites infest - this is real hypocrisy in authentic Catholic Theology (which is solid foundation of true Scriptural scholarship), when actions are refused consistency with their mind (which SSPX-Menzingen has lost sight of - maintaining 'TLM' yet still all the while formally subscribing also to Neo-Catholic 'conservatist' fundamentals) : "The Great Facade" if we may borrow that title once popular among the 'circle,' yes, of ancient horizon "yet always new" (St. Augustine).
Posted by Ignis Dei at 5:51 PM