The Mystery of the Incarnation of the Son of God

Feast of the Annunciation 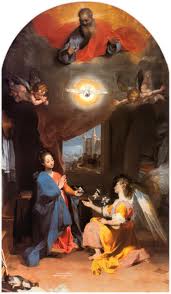 The heathen had very clearly conceived the idea that God had descended from heaven and mixed with men; the Greek mythology is full of it. Now God has actually come down to earth (Jn. 3.13) at the moment of the Annunciation: the Second Divine Person of the Most Holy Trinity became man in the womb of the Blessed Virgin Mary by the action of the Holy Ghost in the instant when the Blessed Virgin Mary uttered the words, Fiat mihi secundum verbum tuum (Be it done to me according to your word, Lk. 1.38).

The Incarnation is that "divine intervention" other than which there was "no other that could more successfully have snatched us away from evil and more powerfully dispose us toward goodness" (Fr. Reginald Garrigou-Lagrange, OP, "Our Savior and His Love for Us," 101-102) for, from the point of view of God, the Incarnation is just fitting for Him "Who Is inclined to give Himself as much as possible to man" (ibid., 101).

Necessity of the Incarnation

As we shall see in the death of Our Lord Jesus Christ on the Cross, God wished to have perfect satisfaction to His injured majesty, to display His justice as well as His mercy. Now, "the greatness of an injury is measured by the dignity of the one who suffers; hence the offence given to God by the sin of disobedience of our first parents is infinitely great. No finite being, not even the most perfect angel, could atone for an offence against God, only God Himself" (Frs. Spirago-Clarke, "The Catechism Explained"). "So that," according to St. Ambrose, "to redeem man it was necessary that God should become man." "As God only, He could not suffer; as man only, He could not redeem;" (Frs. Spirago-Clarke, op. cit.) hence the Eternal Word assumed a human nature.

The God-Man could satisfy perfectly the injured majesty of God by appearing on earth in our state of a lowly creature. Had He appeared in His divine majesty, the Jews would never have dared to crucify Him (1 Cor. 2.8).
Posted by Ignis Dei at 1:06 PM