Feast of the Holy Angels 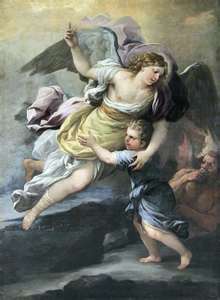 In the Sacred Scriptures, the term angel is applied also to the priests. ... The lips of the priests shall keep knowledge, and they [the people] shall seek the law at his mouth: because he is the angel of the Lord of hosts" (Malachi 2.6). The Bishops, [whom] the Holy Ghost hath placed... to rule the church of God (Acts 20.28), are angels (Apocalypse 2.1,8,12,18, etc.). For like to the spirits who behold the face of God (the Beatific Vision), they are the visible ministers of the Most High: the angels ascend and descend from the throne of God (Genesis 28.12: John 1.51), so did the Levitical priests of Old  (1 Kings [1 Samuel in non-Catholic versions] 2.28) and our Traditional Catholic priests (the Levitical priests of the New Covenant) do ascend and descend the high altar; more so, for they ought to exalt Him above all... (Daniel 3.58) and do His will (Psalms 102.21) - to execute His word, hearkening to the voice of His orders (Psalms 102.20).


Now, God decreed that His earthly sanctuary be made according to the [heavenly] pattern (Exodus 25.40). Thus the Tabernacle and the Temple of Old and the traditional Catholic sanctuary were made. But alas! The Second Vatican Council, overran by the minions of the Synagogue of Satan (Apocalypse 2.9; 3.9) - the Freemasons (cf., our post "A Perilous 'Catholic' Voyage") and Communists (cf., our post "The Year that was 1929")* - under the trappings of a Catholic pastor, made its first business the opening of the Holy of Holies to strangers - first to strange priests** (donned, if at all, in Protestant 'liturgical' vestments), trained under the school of the New 'Catholic Theology' (cf., our post "The Ultimate Delusion of Vatican II 'Catholicism'") to "preach [the Protestant "movement" (Pope John Paul II in "Ut Unum Sint") of] ecumenism" (Pope Paul VI, cf., our post "Our 'Great Reversal'"); second, to the leaders of false religions (the sacrilegious Assisi Meetings, cf., our post "The 'Great Tribulation'") - and its being refashioned according to the assembly hall of Masonic Lodges (cf., our post "The Catholic Sanctuary Prefigured in the Old Testament II") with the result of  the Eucharistic King dethroned (He used to occupy the traditional high altar) rather than exalted, relegated to the side of His sanctuary or even exiled from His temple, and profaned (Ezechiel 22.26)! It was therefore written of the angels who allowed such abomination of desolation (Daniel 9.27; 12.11; Matthew 24.15) to take place: Her priests have despised My law, and have defiled My sanctuaries... and I was profaned in the midst of them (Ezechiel 22.26). And yet, at a conference held last September 26 in the Catholic University of America on the post-Conciliar period, Cardinal William Levada, the retired successor of Cardinal Ratzinger (now Pope Benedict XVI) to the 'presidency' of the Neo-Catholic Congregation for the Doctrine of the Faith (the defunct "Holy Office"), and of kindred 'spirit' insisted that "Vatican II is neither optional nor second-class." A great number of the angels were turned into dumb dogs... blind... seeing vain things, sleeping and loving dreams. And most impudent dogs, they never had enough... [!] (Isaias 56.10,11).
---
* It was prophesied of Old: And a people... shall come, shall destroy the city and the sanctuary: and the end thereof shall be waste... (Daniel 9.26: Lamentations 2).

** [They]  have made void the covenant of Levi.... have cast out the priests of the Lord... the Levites...*** and you have made you priests like the all the nations of the earth (Malachi 2.8; 2 Paralipomenon [2 Chronicles in non-Catholic versions] 13.9).

*** The traditional Catholic priests bear the Levitical character of priestly ministry such as ascending the high altar of the true God, as above - a character not just lost among but actually disowned by the Ecumenical Neo-Catholic 'priests' of Vatican II [Dis-]Order.
Posted by Ignis Dei at 2:49 PM