Pastors according to God's Heart?

... Christ... also hath made us fit ministers of the New Testament
(from the Lesson, 2 Cor. 3.4-9).
A certain Samaritan, being on his journey, came near him: and seeing him, was moved with compassion. And going up to him, bound up his wounds, pouring in oil and wine; and setting him upon his own beast, brought him to an inn, and took care of him
(from the Holy Gospel, St. Lk. 10. 23-37). 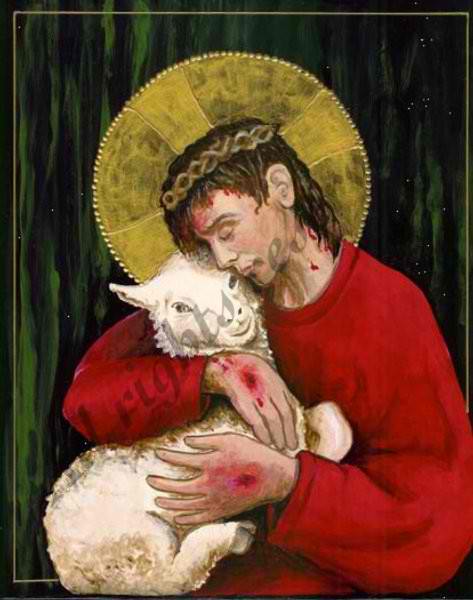 According to the Fathers, the man spoken of in today's Holy Gospel, who fell among robbers, symbolizes human nature which, in the person of Adam, was entrapped by the devil and despoiled of grace and other supernatural benefits. The wounds of the man represent the injuries inflicted on human kind by original sin, namely, ignorance in the intellect, malice in the will, and concupiscence and infirmities in the lower nature.

The good Samaritan who bound up the wounds of the injured man, pouring in oil and wine, refers to Christ, who in the seven Sacraments has provided remedies against sin and its pernicious consequences. And not only did Our Lord institute these gracious and healing cures for our souls, but He has also through His legitimate ministers provided for their continuance* in the Church until the end of time. But what did Paul VI provide and his lawful successors [except Bergoglio - why, cf., our post "Sagittam Electam - II" on the anomalous "Declaratio" of 'resignation' read by Pope Benedict XVI.] to the mainstream-institutional-Church cut-off by false 'obedience' with the exaggeration that the Pope binds the Church in what he says and does? A "NEW" Rite of 'Blessings' and 'Sacraments' [including the "New M[e]ss" principally "fabricated"** by an infiltrated*** sworn enemy of the Church, Annibale Bugnini - a Freemason, see his work of a Neo-Catholic sanctuary: "The Catholic Sanctuary prefigured of Old - II"] with "INEFFECTIVE**** prayers" (Vatican's Chief Exorcist, in "30 Days" magazine of June 2000). What happened to the 'Old' Sacraments instituted by God Himself, effective no more? The 'great St. John Paul II' had acknowledged that Paul VI's 'liturgy' was "tampered with" (L'Osservatore Romano, 7th Feb. 1981 in our post "Our Lady and the Diabolical Campaign") yet he did not do anything to save Catholics from being poisoned with it!
---
* The purpose of Abp. Lefebvre why he defied Rome in consecrating auxiliary bishops: to provide traditional Catholic Bishops who were supposed to provide true Roman Catholic priests+ - who in turn will provide the elect with the same always valid AND legitimate effective Sacraments - and valid Confrimation; not to establish a parallel territorial jurisdiction in competition with Rome [as was the case with the Chinese 'Patriotic Church' - and how the hypocritically disoriented Rome dealt with it compared with the venerable Archbishop!] -  why, in the Canon Law of the true Church, the penalty of automatic excommunication could never have been incurred by the Archbishop, then already nearing death, and by those who adhere to him.

+ A "NEW" 'religion' calls for a "NEW" worship ('Mass') which in turn demands "NEW" Protestantized 'priests': cf., "Sign of Desacralization" and Sacerdotes daemoniorum

** Card. Ratzinger, now Pope Benedict XVI, in his Preface to the French ed. of Msgr. Gamber's Reform of the Liturgy.

**** Fr. Gabriel Amorth was referring to the "New" Rite of Exorcism - which is only a sacramental and not a Sacrament - even authorized by Paul VI. If a sacramental was rendered useless - therefore, not providing the remedy expected of it - by its formulae of prayers revised to get it in line with and reflect Neo-Catholicism (cf., the so-called "NEW Catholic THEOlogy" - a new concept of [g]od, "The Ultimate Delusion of Vatican II-Catholicism"), what of the "NEW" Rites of 'Mass', 'Reconciliation', 'Ordinations' and others provided by the same Paul VI?