Feast of St. Francis of Assisi

Our Lord revealed to this 'seraphic' Saint of Assisi that He would restore the Church on him - why the Church, in the lessons of her Divine Office today, inculcates with this great Saint: "Blessed is the... man who is found without blemish: who hath not gone after gold, nor put his trust in money nor in treasures" (Ecclus. 31.8-9). 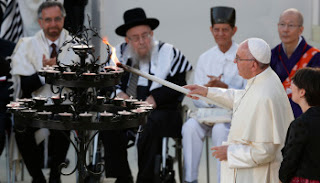 Since the 'hijacked' Vatican II Council, Assisi therefore has to be the center of the subversion of that restoration by the ecumenical "disorientation" of Rome itself - that the Catholic Religion is only one among the false religions (logical conclusion: the Catholic Religion is therefore also false) authored by one and the same [g]od (logical conclusion: there is no God for if He claims to be "the Truth" He could not author conflicting and contradicting creeds); indeed, there is "no Catholic God" (the pseudo-Pope Bergoglio). It was in Assisi that the 'official' hierarchs proclaimed their apostasy pointed out by the Immaculata at Fatima, Portugal: "diabolical disorientation even among those who occupy responsible positions" - they have overthrown the Catholic Religion from its very foundation: "In Nomine Patris, et Filii, et Spiritus Sancti," the Triune God, that they could stand in league with the "Synagogue of Satan" (Apoc. 2.9; 3.9) and pagans whose "gods are the devils" (Ps. 95.5 - the Sacred Latin Vulgate of St. Jerome, "the greatest Doctor of the Church;" the "New 'Catholic'" versions obviously have to depart from this reading that the 'Word' stand not in contradiction to their ecumenical disorientation).

Traditionally, to those adult converts who come to the Baptismal font that they live in league with Christ Crucified the Church exhorts them:

No, the Church has not changed; it appears only to have been eclipsed by the "New 'Catholic' disOrder" of Vatican II (see St. Augustine @ "The Great Tribulation") - the "pseudo-Church" of infiltrated revolutionaries (see "The Year 1929") possessing and instrumentalizing our institutions : the Apocalyptic great harlot "in purple and scarlet" (17.4). "Woe is me, wherefore was I born to see the ruin of my people, and the ruin of the holy city, and to dwell there, when it is given into the hands of the enemies? The holy places are come into the hands of strangers" (1 Mach. 2.7-8).

"What fellowship hath light with darkness? And what concord hath Christ with Belial? Or what part hath the Catholic faithful with the unbeliever?" (2 Cor. 6.14-15)
Posted by Ignis Dei at 5:02 PM