"Priests will be FAR from their ideal" - Our Lady of Good Success @ Quito, Ecuador in the 17th c. prophesying about the "tampered"* priesthood - the new ecumenical 'Modernist' 'priesthood' since 1969 - to eclipse, as it were, the true (traditional) Catholic priesthood in "the greater part of the 20th c." "MANY will say to Me: Lord, Lord, did we not preach... cast out devils (@ the Confessional and by exorcisms)... and performed miracles (by valid Consecration) in Your Name? And then will I profess unto them: I never knew you: depart from Me you workers of iniquity" (Mt. 7.22-23).
---
* Pope John Paul II, originally on the "New 'Liturgy'" invented by the infiltrated Freemason, Bugnini.
--- 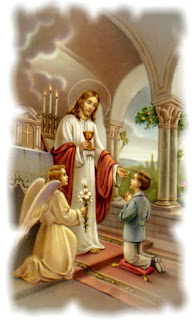 In the miraculous multiplication of loaves and fish (today's Holy Gospel, Jn. 6.1-15, 4th Sunday in Lent - "Laetare Sunday"), prelude to the greater miracle of Transubstantiation and with it the multiplication of His Real Presence in holy Communion: "After that Jesus took the loaves: and when He had given thanks, HE DRISTRIBUTED to them that were set down." Jesus did not make void the Levitical unction of Old - only the consecrated hands of Levitical priests may handle the sacred - but raised it to its perfection. Paul VI, however, in introducing the Lutheran 'priesthood' - "presider" ("Institutio Generalis," Apr 1969) in Lutheran/Anglican 'liturgical' costumes in the institutional Church: "You have departed out of the way, and have caused many to stumble at the law: you have MADE VOID THE COVENANT OF LEVI" (Mal. 2.8); this invention later craved for yet another: "In that you have brought in strangers... in my sanctuary" (Ezech. 44.7) - the so-called 'extraordinary eucharistic lay/non-cleric ministers/mistresses (including the 'altar girls')'.

These condemned 'bastards' ("I never knew you...") dare claim that Catholic Resistance's is the illegitimate priesthood and ministry?
Posted by Ignis Dei at 6:24 PM