Solemn Commemoration of the Blessed Virgin Mary of Mt. Carmel

In the Lesson proper to the "Order of the Virgin" (Our Lord to St. Teresa of Jesus), Israel was parched, thus chastised for her double allegiance - both to the one true God and to Baal; the 'ecumenical' harlotry of Old. This was the moment when we first saw the figure of the Woman who "shall crush [the] head" of Satan (Gen. 3.15) - "a little cloud arose out of the sea like a man's foot" to let down "a great rain" [of grace] (III Kings 18.44,45) - but not until the first General of Her Order, the great Prophet of Carmel, Elias, rose up to resist the mainstream OT Church (with the High Priest and the official hierarchy in complicity!) in their ecumenical error: "How long do you halt between two sides?!!!" (III Kings 18.21); and, unmasked Baal for the false god that it is to deliver them from their unholy alliance.

Now, behold how the official Modernist 'Catholic' hierarchy has brought the mainstream to that same old unholy allegiance - their real standard, their "NEW 'Catholic [t]HEOlogy'" (at the very heart of the New Missal), getting fully unmasked (in parody of the unveiling of the Cross during the Good Friday rite) side by side the "Catholic God" contained in the monstrance (granting Sacramental validity) and at their 'solemnity' of "Corpus Christi" in this 100th year since the Apocalyptic visitation of the "the Great Sign in heaven" (Apocalypse 12.1) @ Fatima, Portugal! Understand why the Immaculata must have been last seen again at Fatima as the Queen of Carmel - Her pledge of "eternal alliance" will rest, as our Habit in its miniature form does, on valiant 'singular' hearts who would refuse to "halt": "the REST of Her seed" (Apoc. 12.17); a distinction were to be made against the mainstream (Fr. John, C.D.). - see, Catholic Resistance 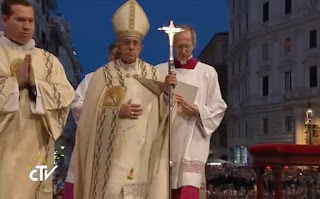 Close-up of the mocking standard by the crazy head of 'Modernist Catholicism' in league with the "New World disOrder"... 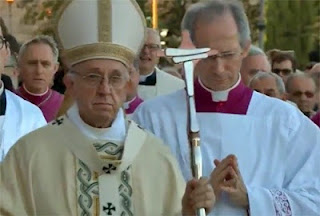