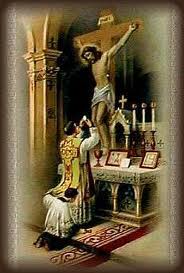 Almost all the provinces of the Spiriual Life are pervaded by a so-called ‘holy discouragement.’ We are something more than dissatisfied, something less than disheartened. When we look at ourselves, at our defeats, nay, even our victories, we cannot help but be depressed. If we consider the multitude and weight and ubiquity of our temptations, the scene is little less disheartening, especially when we add the consideration of our invisible spiritual foes. So also the world, and its effect upon us and power over us, are all discouraging facts of our Christian warfare. Indeed in all things our very safety consists in being afraid, in a sense of inferiority, in a conviction that we are no match either for our own poor selves or for selves or for evils from without. Yet for all this we must be joyous, confident, secure; and as there are no fountains for these things either in self or circumstances, we can only find them in our Faith, and our Faith, preached in all the creation that is under heaven (Col. 1.23), is the victory which overcometh the world (1 Jn. 5.4). However, Faith is not the end; it must lead us to our hidden God dwelling in our midst, discerning the Body of the Lord (1 Cor. 11.29) – the Living Bread (Jn. 6.51) – reposing on the high altars (cf., Heb. 13.10) of the New Covenant.

The love of the Blessed Sacrament is the ground and royal devotion of Faith. And out of it there come three especial graces which are the very life and soul of an interior life:

An overflowing charity to all around us

The very joyousness of having Jesus with us, of being in actual and delighted possession of Him, renders us full of charity to others. Happy ourselves, we are anxious to make others happy also. To be full of charity is in itself a pain, if we have no vent by which we can pour out of our fullness over others. Something of this sort could be the reason why God created us, for Good is diffusive of Itself. And are we not created according to the image and likeness of God (Gen. 1.26)? Charity is the choicest as well as the most exuberant emanation from the Adorable Divine Host.

A thirst to sacrifice ourselves for God

Self-sacrifice is of the very essence of holiness. Love is impatient of secrecy, at least of being concealed from its object. It longs to testify itself, and the stronger and the purer it is, the more does it desire to testify itself in different and heroic ways. Nay, love needs self-sacrifice as an evidence to itself of its own earnestness and intensity. How little have we given up for our dearest Lord, and how we burn to sacrifice ourselves in some way for Him. Now devotion to the Blessed Sacrament has a special power to communicate this divine spirit. The Holy Eucharist is a sacrifice, as well as a sacrament; no wonder the spirit of sacrifice goes out from It, and is contagious of among loving souls. But it is not out of the meekness and sweetness and gentleness and bashful humility of love that this ardent desire of sacrifice arises; but out of love’s boldness, its victory, its warlike prowess, its sense of triumph.

People, and even those who call themselves ‘Catholics’, often try to draw a distinction between what is spiritual and what is ecclesiastical in the Christian religion; and obviously for many purposes, and from many partial points of view, such a distinction is very capable of being drawn. But the two cannot be separated the one from the other; they lie together practically inseparable. Hence, there is no interior or mystic life, not even in the cloister, which is not distinguished by a vivid interest in the vicissitudes of the Church, an inveterate attachment to her external and ceremonial observances – accidentals that show what she is – and quite a supernatural sympathy with the fortunes of the Holy See. Love of God and love of Rome are inseparable. To obey the successors of Peter, who take the place of [the] ministry and apostleship (Acts 1.25) even to the consummation of the world (Mt. 28.20), for obedience to the faith (Rom. 1.5), is the same thing as to serve Jesus for Christ loved the Church [He Himself built on Peter (Cephas or "rock" in Aramaic, the original language spoken by Our Lord), Mt. 16.18], and delivered Himself up for it (Eph. 5.25).