Salvation in the Name of God

Feast of the Holy Name of Jesus

Whosoever that shall call upon the Name of the Lord, shall be saved
(Joel 2.32). 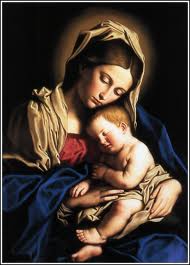 The Name Jesus was a fairly common one among the Jews. In the original Hebrew, it was "Joshua". The angel told Joseph that Mary would bring forth a Son: and thou shalt call His name JESUS. For He shall save His people from their sins (Mt. 1.21). The first indication of the nature of His mission on earth does not mention His teaching; for the teaching would be ineffective, unless there was first salvation.


He was given another name at the same time, the name Emmanuel. Behold a virgin shall be with child, and bring forth a Son, and they shall call His name Emmanuel, which being interpreted is, God with us (Mt. 1.23). This name was taken from the prophecy of Isaias (7.14) and it assured something besides a Divine presence; together with the name Jesus, it meant a Divine presence which delivers and saves. The angel also told Our Blessed Mother: Behold thou shalt conceive in thy womb, and shalt bring forth a Son; and thou shalt call His name Jesus. He shall be great, and shall be called the Son of the most High... (Lk. 1.31,32).


The salvation that is promised by the name Jesus is not a physical, economic, or social salvation, but rather a spiritual one. He would not save people necessarily from their poverty or physical pains and sufferings, but He would save them from their sins. To destroy sin is not to uproot the first causes of poverty. The name Jesus brought back the memory of their great leader, who had brought them out of Israel to rest in the promised land. The fact that He was prefigured by Joshua indicates that He had the soldierly qualities necessary for the final victory over evil, unwavering courage, resoluteness of will and unshakable devotion to the Father's mandate.


The people enslaved under the Roman yoke were seeking deliverance; hence they felt that any prophetic fulfillment of the ancient Joshua would have something to do with politics. Later on, the people would ask Him when He was going to deliver them from the power of Cesar. But here, at the very beginning of His life, the Divine Soldier affirmed through an angel that He had come to conquer a greater enemy than Cesar. They must still render to Cesar the things that were Cesar's; His mission was to deliver them form a far greater bondage, namely, that of Satan through sin. All through His life people would continue to materialize the concept of salvation and deliverance. The name Jesus or Savior was not given Him after He had wrought salvation, but at the very moment He was conceived in the womb of His Mother. The foundation of His salvation was from eternity and not from time.

By the Name of Our Lord Jesus Christ...
neither is there salvation in any other.
For there is no name under heaven given to men,
whereby we must be saved.
That in the Name of Jesus every knee should bow,
of those that are in heaven,
on earth, and under the earth
(Acts 4.12; Philippians 2.10)