Christian Doctrinal Instruction: The Real Presence of Jesus Christ in the Sacrament of the Holy Eucharist 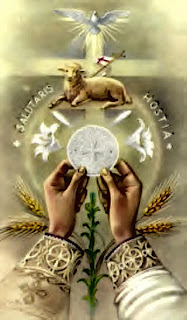 After the miraculous multiplication of the loaves and fishes (the Gospel for the Fourth Sunday in Lent) the people went in search of Christ, and found Him in the synagogue at Capharnaum. They wanted Him to give them bread again; but Our Lord promised to give them the ﻿Bread ﻿of immortality. When they asked asked Him for It, saying: Lord, give us always This Bread﻿ (Jn. 6.33), He answered: ﻿The Bread that I will give is My Flesh﻿ (Jn. 6.52). And when they refused to believe His words, He rather reiterated - which reiteration only underscores the difficulty already discerned by the Jews and some of  Our Lord's disciples in v. 52: Amen, amen I say unto you: Except you eat the Flesh of the Son of man, and drink His Blood, you shall not have life in you. He that eateth My Flesh and drinketh My Blood, hath everlasting life, and I will raise him up at the Last Day. For My Flesh is Meat indeed, and My Blood is drink indeed ﻿(Jn. 6.47,54-56). From the Scriptural passage, Our Lord's language is not susceptible of any symbolic or metaphorical interpretation as the "Bible-only" sectarians would have it.

"When Our Savior," explains Cardinal Gibbons, "says to the Jews: Your fathers did eat manna, and are dead..., but he that eateth this ﻿[Eucharistic] Bread shall live forever ﻿(Jn. 6.49,59), He evidently wishes to affirm the superiority of the Food which He would give, over the manna by which the children of Israel were nourished."

"Now, " continues the same eminent prelate, "if the [Holy] Eucharist were merely commemorative bread and wine [as the "Bible-only" sectarians profess it to be], instead of being superior, it would be really inferior to the manna; for the manna was supernatural, heavenly, miraculous food, while bread and wine are a natural, earthly food."

"But," the same prince of the Church points out, "the best and the most reliable interpreters of our Savior's words are certainly the multitude and the disciples who are listening to Him. They all understood the import of Our Lord's language precisely as it is explained by the Catholic Church, the pillar and ground of the truth ﻿(1 Tim. 3.15). They believed that Our Lord spoke literally of His Body and Blood. St.  John the Evangelist tells us that the Jews strove among themselves, saying: How can this Man give us His Flesh to eat?﻿ (Jn. 6.53) Even His disciples, though avoiding the disrespectful language of the multitude, gave expression to their doubt in this milder form: ﻿This saying is hard, and who can hear it? ﻿(Jn. 6.61) So much were they shocked at Our Savior's promise that after this many of His disciples went back and walked no more with Him﻿ (Jn. 6.67). They evidently implied, by their words and and conduct, that they understood Jesus to have spoken literally of His Flesh; for, had they interpreted His words in a figurative sense, it would not have been a ﻿hard saying﻿﻿, nor have led them to abandon their Master" ("The Faith of Our Fathers," 236-237).

The "Bible-only" sectarians would require that "Transubstantiation," the "Real Presence of Jesus Christ in the Sacrament of the Holy Eucharist," etc. be literally ﻿expressed by the Sacred Scriptures before that they accept Catholic dogmas; but now that the Word speaks literally of the Bread of Life ﻿which He would give to be His Flesh ﻿and ﻿Meat indeed ﻿﻿they desist. No, only Catholics believe in the same Jesus Christ revealed in the Sacred Writ.


A most blessed Feast to all!

Related posts: "We have an altar (Heb. 13.10): The Divine Institution of the Holy Sacrifice of the Mass;" "Doctrinal Instruction: the Sacrament of the Holy Eucharist"