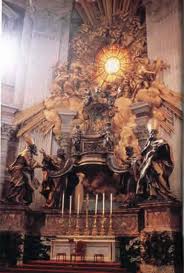 Many have falsely taken that the successor of Pope Benedict XVI will be the last Roman Pontiff as given in the "Prophecies of St. Malachy" (cf., our post "Gloria Olivae"). They wrongly conclude therefore that the consummation is near.

The truth is, St. Malachy only did not give the Popes who will reign during the "period of peace" spoken of by Our Lady of Fatima - the period of the triumph of the Church that will be brought about by the Triumph of the Immaculate Heart of Mary*. This "period of peace" follows our "end-times period" - the Great Tribulation wherein the Sun (Our Lord Jesus Christ and His Gospel) and the moon (the Catholic Church) were darkened, eclipsed as it were, by the false Christ of the Neo-Catholic Theology and the pseudo-Church, the Neo-Catholic Church or the "Novus Ordo" [the New 'Catholic (Dis)order'] of Vatican II.
---
* Our Lady of Fatima said that the Holy Father will consecrate Russia to Her Immaculate Heart but this will be "late". "Late," that is, perhaps, the successor of Pope Benedict XVI will finally consecrate Russia to Her Immaculate Heart after that God will have shaken His ministers to their Catholic senses by bringing down the chastisement of world-wide conflagration (cf., "Our Lady, Vatican II Disorientation, and the 'Annihilation of Many Nations'"). In the Great Secret of Fatima, Our Lady warned of the "Annihilation of Many Nations" as the ultimate consequence for not heeding Her requests.
---
It seems that there will be three Roman Pontiffs to reign in the coming "period of peace" for the Church. "Three," for just as Peter was given only the measure of three times of betrayal and denial of his Lord and Master so will he be given three times to undo the unprecedented Papal betrayal and mockery of Our Lord and His Church which started with the 'presidency' of Pope Paul VI who let the grand revolutionary mock-scheme that had prevailed in the Second Vatican Council to profanate the high altar and the sanctuary, to corrupt the priesthood, and to disfigure the face of Christ and of His Church.

1st Sun in Advent: The powers of heaven shall be moved (Lk. 21.26): Pope Benedict XVI is still the true Roman Pontiff; 'Pontifex' Bergoglio - installed as another modern-day anti-pope. See Sagittam Electam on the anomalous "Declaratio" of 'resignation' by Pope Benedict XVI.
9th Sun After Pentecost: Thou hast not known the time of thy visitation (Lk. 19.44): "The Time of God's Visitation"
Surrexit Dominus vere, Alleluia! On the Grace and Virtue of Penance: "Absolvo te..." (I)
29 Mar. Holy Friday: Christian Love: Love of the Cross
28 Mar. Holy Thursday. We have an altar (Heb. 13.10): The Institution of the Holy Sacrifice of the Mass
26 Mar. Holy Tuesday: On Lust and the Vice of Impurity
24 Mar. 2nd Sunday of the Passion (Palm Sunday): ... An ass tied (Mt. 21.2): On the Habitual Sinner
19 Mar. St. Joseph - Spouse of the Bl. Virgin Mary and Patron of the Universal Church. "The School of St. Joseph: Continual Adherence to the Divine Plan"
10 Mar. 4th Sunday of Lent: Why will you die? (Ezech. 18.31): On the Tender Compassion of Our Lord Towards Sinners
3 Mar. 3rd Sunday of Lent: Jesus was casting out a devil, and the same was dumb (Lk. 11.14). The Dumb Devil
24 Feb. 2nd Sunday of Lent: Lord, it is good for us to be here (Mt. 17.4): "Christianity: Not a Feel Good Religion"
17 Feb. 1st Sunday of Lent: Thou shalt not tempt the Lord thy God (Mt. 4.7): "On the Number of Sins Beyond Which God Pardons No More"
10 Feb. Quinquagesima Sunday: Lord, that I may see (from today's Holy Gospel, Lk. 18.31-43): "The Delusions of Sinners" by St. Alphonsus Liguori