Saturday in the Easter Week 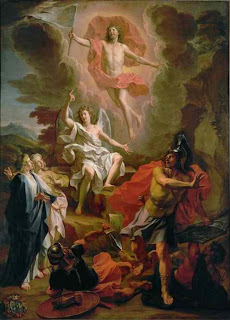 And on the first day of the week... when it was yet dark... the stone taken away from the sepulchre (v.1). The Jews keep the last and seventh day of the week, the Sabbath day, holy (Ex. 20.10). The Sabbath was a joyous festival for them because on that day also, the Hebrew people were released from slavery in Egypt. But it was only a figure (1 Cor. 10.6) of that most joyous day when the Lord and Savior Jesus Christ emerged as the greatest Victor from the sealed and guarded sepulchre with a large company of His subjects, under the Old dispensation, justified by their life of faith and hope in Him as the promised Lord Redeemer of Israel (Is. 49.7), but were kept "in durance" (in limbo). Hence, the Apostles appointed the glorious day of the Orient from on high (Lk. 1.78) - the Day of Him Who Is the Orient, "Sun"-day -  the first day of the week (Acts 20.7) as that real holy day of Christian rest when Christ's disciples were assembled... in prayers (Acts 2.42)... [on bended knees, cf., Phil. 2.10] before the altar (Heb. 13.10) of the New Covenant in the communication of the breaking of [the Living Bread (Jn. 6.51; cf., v.34) - prefigured of Old to be the most holy (Lev. 24.9) unbloody sacrifice of Christ as the eternal high priest according to the Order of Melchisedech (Heb. 6.20)] (Acts 2.42).