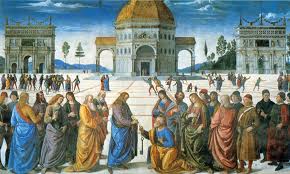 All power in heaven and earth is given to Me (v.18). If Jesus is God, why power is GIVEN Him? Jesus is BOTH God AND Man [cf., the testimony of St. Peter the Apostle in "The Petrine Confession"]. As Man, He received all power in heaven and earth from God. Secondly, "it may also be said that the Eternal Son, though He be equal and be the same God with the Father [cf., Jn. 10.30,33; 17.5], yet He proceeds and receives all from the Father" (Dr. Witham, in Fr. Haydock's Commentary).

In virtue of this power Christ sends the Apostles even AS the Father sent Him (Jn.20.21) to teach and make disciples not one but all nations. Christ would build upon "Cephas" ("rock" plain & simple in the original Aramaic), Mt.16.18, a Universal ("Catholic") Church.

The Eternal Word-made Flesh did not command "to write the New Testament" - He Himself did not write anything - and not "distribute the Bible" for He would later teach through the Apostle St. Paul that the saving Faith cometh by hearing (Rom. 10.17) - a refutation of what the "Bible-only" fundamentalists assert by implication: "by reading."

Baptizing them 'in Nomine Patris, et Filii, et Spiritus Sancti (v.19). This is the Baptism in the Name of Jesus mentioned in Acts 8.16 to distinguish it from that baptism in the name of John the Precursor. Thus, the non-Trinitarian baptism being performed by some Bible-only fundamentalists is invalid.

Behold, I Am with you all days, even to the consummation of the world (v.20). Christ's promise is not limited to the final year of the natural life of the last Apostle to live. It must necessarily be extended to their successors who are to take the place of this ministry and apostleship (Acts 1.25) until the end of time. This refutes the claim of the "Bible-only" fundamentalists, on the one hand, that the original Church built by the Lord and Savior had defected from the Truth and fallen into the abyss of idolatry and immorality; and, the claim of the Sedevacantists (cf., our post "Against Sedevacantism" Part I and Part II), on the other, that the Chair of Peter is still empty since the death of Pope Pius XII in 1958 - but has since been occupied by charlatans - and the official episcopal body stuffed with laymen in episcopal trappings. The gates of hell shall not prevail [the Savior did not say, "shall not ASSAIL WITHIN AND WITHOUT"] against it (Mt. 16.18). There were those who apostatized and they were even of great number, but the whole "Mystical Body of Christ"? - as if Christ's shedding of His Blood were fruitless and therefore futile. No man ever hated his own flesh; but nourisheth and cherisheth it, as also Christ doth the Church (Eph. 5.29).