Behold how good and how pleasant it is for brethren to dwell together in unity (Ps. 132.1, in today's Office for Vespers).

CNA (Catholic News Agency) reports the following statements of the Rotarian clown blasphemer sitting on the seat of Satan (Apoc. 2.13) erected over the Chair of the Truth (cf., Pope Leo XIII in his Prayer to St. Michael after a detailed vision on the Church of Rome succumbing to become the seat of Satan was given him; see also "A Perilous 'Catholic' Voyage"):

But a Christian lowering himself after him?


... Serving the devil after his example at a Synagogue of Satan (Apoc. 2.9;3.9) and a minister of the devil giving instructions as the 'Blessed' Pope John Paul II did? 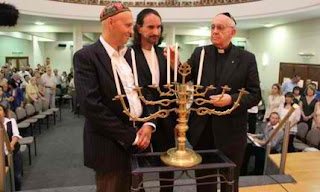 ... Then he must follow his 'master' in feigning virtue.

We ask: And what do we say of a 'Pontifex' openly repudiating the real Christ of the Apostolic Tradition? (cf., our posts "The True God - The Catholic God", and Estote Sapientes).

2. “For me ecumenism is a priority. Today there is an ecumenism of blood... We are united in blood, even though we have not yet managed to take necessary steps towards unity between us..." (interview with the Italian "La Stampa," 16th December).

It's not even "the Blood" with a capital "B". Indeed, this Rotarian clown charlatan is another special divine scourge of rather nominal 'Christians' who receive not the love of the truth (2 Thess. 2.10) - God [sending] them the operation of error to believe lying (ibid.): a "New" life-principle, a "blood" other than the Most Sacred and Precious Blood of the Crucified shed for many (not the lie of "for all" as was found at the very heart of the worship of the idol of Neo-Catholicism or the "New" 'Catholic' DisOrder of Vatican II - the "[non-]Catholic God" of another modern-day anti-pope, see "The Ultimate Delusion of Vatican II 'Catholicism'"). A special divine scourge, for his spirit he himself unequivocally expresses with resoluteness is anti-Catholic and therefore anti-Christ yet the 'Pope-loyalists' who have eyes and ears would not see and hear.