'Pontifex' to youth who prefer the Traditional Latin Mass: "Rigid."


Dedication of the Basilica of Sts. Peter and Paul

Feast of All the Carmelite Saints: Their examples and merits - in meditation of the yoke of God's law and in living for God alone by perfect self-immolation on the altar of divine charity (from the "Collect" of the Traditional Liturgy).

God decreed that His "CEREMONIES" be kept yet the "New" 'Catholic' versions even strike out God's "ceremonies." "Thou hast chosen the Lord this day to be thy God, and to walk in his ways and keep his ceremonies, and precepts, and judgments, and obey his command.... Therefore love the Lord thy God and observe His precepts and ceremonies, His judgments and commandments at all times... That it may be well with thee... In the land which I will give them for a possession" (Deut. XXVI.17; XI.1; X.13; V.31). The worship of the true Catholic God must be clearly distinguished from the worship of the devil who demands also high altars, incense, and sacrificial offerings. Yet, the ceremonies of Old were but a faint type of our Traditional Latin Liturgy : "Look and make it according to the pattern, that was shewn thee in the mount" (Ex. 25.40) - ours is the pattern of Old. 'Rigidity' as the idiot ogre in papal trappings at the ecumenically "disoriented" Vatican scorns this?

"But if thou wilt not hear the voice of the Lord thy God, to keep and to do all His commandments and ceremonies, which I command thee this day, all... curses shall come upon thee, and overtake thee" (Deut. XXVIII.15). Most certainly, the perverted Antipope will fall as "rigid" as a corpse in fright before that fire and brimstone God will pour upon him but that same kind of chastisement will have blotted him out from the face of the earth before that he stink as rotten pig. 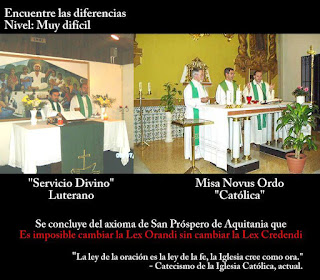 "My people have forsaken Me, the fountain of living water, and have digged to themselves cisterns, broken cisterns, that can hold no water" (Jer. II.13). This is that historical point, since the introduction of the "NEW" Rite of 'Sacraments' (the "cisterns") and 'Blessings' in 1969 by Paul VI, when this figure of the institutional 'official' Church - the mainstream - is fulfilled. Their invented 'Rite' to serve their "no Catholic God" (the 'dynamic' Antipope) holds "NO [grace]." Ours is a ministry that is 'illicit' or 'illegitimate' (not conferring grace because displeasing to God), so they say? The written Word so belies them again. If by their inventions they have forsaken the Very Source of Living Water, see how the pseudo-Pope is lying on this life/death matter in his grand 'DYNAMIC' pretension of what the New 'liturgy' oozing with the 'spirit' of Vatican II could offer. No, we in Catholic Resistance, in our adherence at the least to the same traditional yet always ever new cisterns and channels of divine life of grace, are not the ones suffering 'rigidity' unto eternal death. It is to a church - not to the few remnant - is this Apocalyptic rebuke addressed: "You have the name of being alive and thou art dead!" (III.1).