Sanctity is in the Truth


Feast of All the Saints 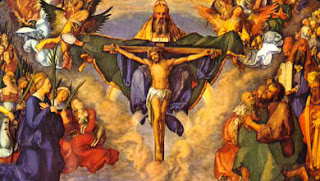 "From the days of John the Baptist until now, the kingdom of heaven suffers violence and the violent bears it away" (Mt. XI.12). In order to be saved, one must embrace and profess the Catholic Faith wholly in all its integrity - thus the Athanasian Creed declares. Our Lord requires in the passage quoted above that this be heroically: only Saints enter heaven.

But if one misses the foundation of authentic sanctity - the Truth - everything is lost...

The perverted head of the "New 'Catholic' disOrder," in his 'apostolic journey' to Sweden in celebration of the anniversary of Luther's 'Bible-only' revolution reiterates the fundamental principle of the "diabolical disorientation" which the Immaculata pointed out to be pervading the 'official' hierarchy in apostasy (the Apocalyptic woman in ecumenical harlotry: Ch. XVII) - the "NEW 'Catholic' THEO...." ("Ultimate Delusion of Vatican II-Catholicism"). Bergogreglio proclaims: "For us.... it is a priority to go out... and to make felt the tender and merciful love of God, who rejects no one and accepts everyone [except the "Catholic Resistance"!]" (Zenith News). This is the key to the "New One-World-Religion" of the precursors of the Antichrist - 'Alright, let us respect each other's views [the true Religion degraded to the level of one's own OPINION], don't directly contravene dogma; yet, don't give a damn to dogma, stop being dogmatic.' And Bergogreglio, their very prince: "... Moving beyond the [dogmatic] controversies and disagreements that have... prevented us from understanding one another."

Lesson Bergogrelio rams down the throat of Neo-Catholics ('Catholics' who walk 'in sync' with the currents of the "New World disOrder"): Luther "helped give greater centrality to the Bible in the Church's life" - the Church, "the pillar and ground of the truth" (I Tim. III.15), had been 'somewhat off on the Word'! He justifies "the concept 'by grace ALONE'" of his equally perverted Augustinian buddy by coating it with the Catholic distinction of antecedence, forgetting that Sacred Writ belies the arch-heretic, by his own self-demolishing un-Scriptural standard, with no mention of the very term "alone" - travesty of authentic Catholic Theology grounded on the Eternal Word written AND unwritten (II Thess. II.14).

St. Francis of Assisi: "At the time of this Tribulation, a man, not canonically elected [cf., our post on the "Declaratio" of 'resignation' of Pope Benedict XVI] will be raised to the Pontificate, who, by his cunning, will endeavor to draw many into error ["because they received not the love for the truth that they might be saved," II Thess. II.10] ... for in those days Jesus Christ will send them not a true Pastor, but a destroyer."