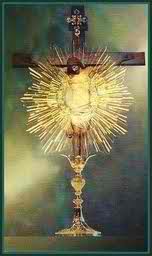 Neither is there any other nation so great, that hath gods so nigh them, as our God is present… (Deut. 4.7).

God’s great kingdom on earth, the Catholic Church – even before that the abomination of desolation(Mt. 24.15) was put standing in theHoly Place (Mt. 24.15) by subtle deception of an ecclesiastical Freemason, Paul VI (who, according to many verified documents – thanks  to the apostolate of the late Fr. Luigi-Villa, then tasked by Padre Pio to expose ecclesiastical Freemasonry and their filthy work – had been a perpetrator of ecclesiastical homosexuality), with his mere “wish” (“volumus,” in the original Latin text of his “Missale Romanum”: no ex cathedra binding decree) to get his “bastard” Protestantized ‘New Mass’ celebrated (April 1969) yet under the ‘official’ air of ‘order from Rome’ (cf., our post Obey God rather than man),  has suffered humiliations though God was no merely symbolically and morally present anymore as of Old but really yet under the [accidental] form of consecrated bread.  The dogma of the Real Presence was clear and well-known but hearts, both of the flock and their pastors, were getting far away from seeking to delight with Him abiding in the Most Blessed Sacrament of the altar. Since Vatican II, the dogma was systematically obscured – if they shy from outrightly denying it: hence the distinction of ‘Modernists’ from the ‘Bible-only’ heretics;  ‘official Catholics’ – adherents of Vatican II-‘modernized Catholic Church’ (the “pseudo-Church” of infiltrated dum[b]ies of the Synagogue of Satan |Apoc. 2.9; 3.9) – were at a great loss what to seek for in their familiar comfort ‘Catholic’ zone (their institutional ‘temples’) whence their being straitened on all sides to wallow in the ‘natural’ pleasures of the flesh (satisfaction of the cravings of bodily organs)and to be in with the Godless anti-Christian Masonic “New World Order” (the Novus Ordo) whose dominating central dogma consists in the diabolical pride of “belief in one's self” which worship is served by the ‘expression of one’s [de-Catholicized] identity’ either with daring immodesty or sensuality (the highest level of ‘expression’ of bestiality) or ‘ecumenical’ contradiction [‘Catholic’ yet either not Catholic – as the Neo-Catholic fans of the demonic ‘Lady Gaga’ for example – or not-so-Catholic]. Ironically, it is this “pseudo-Church” or the “modernized Catholic Church” of Vatican II – to which the [X]SPX of Fellayite regime seeks the ‘officially regular’ integration – who claim to have broken the ‘ritualistic’, ‘one-sided’, ‘old-fashioned,’ ‘Latin-complicated’ Tridentine barriers to a ‘dynamic’ spontaneity of [presumptuous] ‘familiarity’ with the [g]od of ‘luv’ yet never has the Catholic name been so basely profaned in them.

“Nothing is more salutary than This Sacrament for by This are sins purged, supernatural virtues increased and made to fructify much, and the understanding filled with all spiritual charisms” (St. Thomas Aquinas, in today’s Office of Matins).


See also "The Real Presence of Jesus on the Catholic Altar " and "Christian Doctrinal Instruction : The Real Presence. of the God-Man in the Holy Eucharist "
Posted by Ignis Dei at 4:53 PM