Feast of St. Anthony of Padua, "Hammer of Heretics"
Saturday in the Octave of the Most Sacred Heart of the Lord and Savior 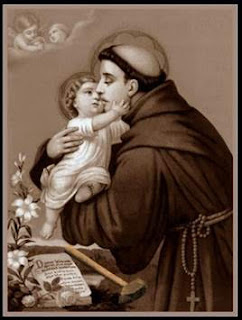 "When the vault in which for thirty years his sacred body had reposed was opened, the flesh was found reduced to dust but the tongue uninjured, fresh, and of a lively red colour. St. Bonaventure, then Minister General of the Order, beholding this wonder, took the tongue affectionately in his hands and kissed it, exclaiming: 'O Blessed Tongue that always praised the Lord, and made others bless Him, now it is evident what great merit thou hast before God.'" (From the "Catholic Encyclopedia," First Ed.)

This seraphic "tongue" of God kept on pounding the moral evils of his time: the vices of luxury, avarice, and tyranny - consequences of the errors/heresies of the Cathares and Patarines then infesting central and north Italy which he sought to extinguish. Indeed, the mouthpiece of God - His prophets, among whom the Carmelites of the Reform of St. Teresa of Jesus who look up to the great fiery Prophet of the true God on Mount Carmel (the Teresian/Discalced Carmelites of Traditional Observance who refuse to have part whatsoever with the "New" 'Catholic' DisOrder inaugurated by Vatican II with the introduction of a "NEW THEO..." (cf., our post "The Ultimate Delusion of Vatican II-'Catholicism'") underlying the "NEW Rite of WORSHIP" (the "Novus Ordo Missae" or the "New [Dis]Order of 'Mass'" of 1969) ought to be God's prophets "par excellence", as Moses was being God's intimate friend - could not help but be a 'boring' continuous divine hammering (cf., our post "Trouble-Maker Prophet"). A 'boring' continuous divine hammering of what evils? The prevailing Neo-Pagan moral standards (paganism with rabid revenge cloaked with 'liberal Modernism') that is the tragic consequence of the "dogma of the Faith" extinguished starting from Rome ("[Not in Rome will...] the dogma of the Faith [be] always preserved, etc." - "the [Apocalyptic*] Great Sign in Heaven" @ Fatima, Portugal in ending the Second Part and introducing the Third Part of Her "Great Secret") - as it is written: The Son of man, when He comes, shall He find, think you, Faith on earth? [Hence], in the day that Lot went out of Sodom, it rained fire and brimstone from heaven and destroyed them all: even thus shall it be in the day when the Son of man shall be revealed <"MANY nations will be annihilated" - the Apocalyptic Great Sign in Heaven @ Fatima, Portugal; cf., our post "Our Lady, Vatican Disorientation, and the Annihilation of Many Nations">" (Lk. 18.8; 17.29-30).
---
* The apparition of the Immaculata @ Fatima, Portgual is not a 'private revelation' as the "Novus Ordo" falsely claims: "Our Lady at Fatima - Not a Mere 'Private Revelation' as Neo-Catholics Dismiss It!"
Posted by Ignis Dei at 6:30 PM